Creating a Strong Character, Chanel Suits and All! 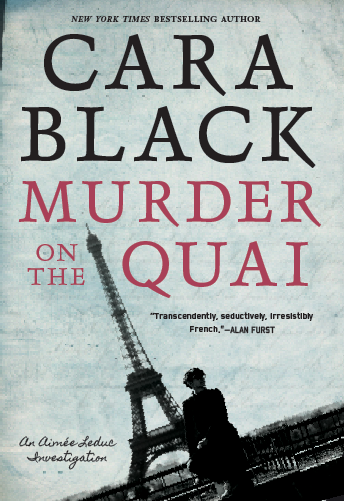 Cara Black first introduced us to the stylish, spirited Aimée Leduc in Murder in the Marais. In Cara’s most recent release, MURDER ON THE QUAI, readers go back in time to learn how Aimée began her career as an investigator. Booklist says, “Finally we have the prequel we’ve been craving… A treat for series fans.” Indeed, MURDER ON THE QUAI’s fast-paced, satisfying plot and evocative Parisian setting will keep readers turning pages long after dark.

Cara recently sat down with The Big Thrill to chat about her character’s evolution, researching the City of Light, and the next installment in the popular Aimée Leduc Investigation series.

Congratulations on the recent release of your new book, MURDER ON THE QUAI, the 16th book in your New York Times and USA Today bestselling Aimée Leduc Investigation series. The series has been a remarkable success, and Aimée has been hailed as a chic, openhearted, sassy heroine. In MURDER ON THE QUAI, readers learn how Aimée got her start as an investigator.  What are the benefits of going back to your character’s origins? How did you know now was the time?

Great question. I never thought I would write a series, much less 16 books. I’m incredibly lucky. For me it’s become stimulating to keep Aimée’s Paris world (set in the 90s) familiar yet fresh. Actually at the end of Murder on the Champs de Mars life-changing things happened to Aimée Leduc and to someone close in her life. I couldn’t see much further ahead for her except from the emergency room in the hospital where this person close to her, who betrayed her (she believes) and was shot, is fighting for their life. Conflicted, heartbroken, all I knew was that Aimée was at a crossroads. I didn’t know where she’d go from there.

My editor asked me what would happen to Aimée, and I think I mumbled I hadn’t much of a clue where Aimée’s life would take her now. Perfect segue for a prequel, my editor said in that brilliant way she has. She said she’d always wondered about Aimée’s origin story, on her younger days, what made her into the private detective (apart from inheriting the agency from her father) she’d become. Where did her dog, Miles Davis, come from and how did she find her partner, René Friant, and how did her vintage Chanel style emerge?  Also, she asked, couldn’t we have a chance to meet Aimée’s father, Jean-Claude, who we’ve heard about for 15 books and see him together with her mother and glimpse that love and attraction that drew these two very different people together?

So in MURDER ON THE QUAI, we get to meet her father, whose death has affected her in the rest of the series. We also meet her grandfather, Claude, who I’ve sort of fallen in love with—he’s a bon vivant, loves good food and haunting the art auctions and has a mistress. Plus the music! I made a playlist to take me back to 1989 including some songs which Aimée hears in the story:“99 Luftballoons,” “Oh Champs Elysèes,” “Love Shack” by the B-52’s, music by Duran Duran and Madonna. Also hearing wonderful old Parisian songs from the 1940s by Edith Piaf, Yves Montand, Charles Trenet that brought to me another era and had me dancing around the laptop.

Did you set out to write a series when you wrote the first Aimée Leduc Investigation novel, Murder in the Marais?  If so, what attracted you to the idea of a series? How has Aimée’s character evolved over time?

Writing a series never entered my mind. It was about telling the story I’d heard in Paris and bringing it to life in Murder in the Marais. This was never a conscious decision nor an organized plan on my end; it evolved organically. I was so thrilled to publish my first book that I hadn’t thought of anything else. When my editor asked me where Aimée was going next in Paris, what would be happening with the man she met, where was her next investigation taking place etc., I got tongue tied. She said, “Wait, you are writing a series, aren’t you?” “Of course,” I lied. So, I started writing about Belleville (where I staying with my friend), describing the street life and found a story. It’s been like that with all the books. I’ve just moved Aimée a few months ahead in time (this was the 90s) and so the stories have stayed in that era (1993-1999 and now the prequel in 1989). I’m so glad, too, because while Aimée has a cell phone she doesn’t have to worry about Facebook, Twitter, Instagram or texting. There were few CCTV cameras and everyone paid in francs—much sexier than the Euro. Oh and you could still smoke in the cafes. She’s got a baby now and is juggling her life, as mothers do, between running her PI business, taking care of her little daughter and trying to have a love life.

The Aimée Leduc Investigation series is set in Paris.  In fact, Alan Furst has called your books, “Transcendently, seductively, irresistibly French,” and you even have a Paris Travel page on your own website, which I absolutely love.  Why did you choose Paris as the setting for these novels? What have been the challenges of choosing a real-life locale as the backdrop for your books?

Thank you! I love Paris. Who doesn’t, right? I wanted to read about the ambiance, the smells, fashion details, art, the history and the people who lived there. At that time I couldn’t visit as much I wanted. Yet, there were so few books about contemporary Paris, (at least that I could find) and I loved mysteries. It’s said you should write what you like to read and I took that to heart. I loved the old mysteries set in other eras in Paris, i.e. Edgar Alan Poe, George Simenon’s Inspector Maigret’s series, and I kept thinking why not write about the Paris I experienced when I visited (this was in the 90s). Not so different from now. I was also burning to tell the story of what happened to my friend’s mother, a young Jewish girl, during the German Occupation in the Marais.

Paris is an exacting muse; it’s a real city and I strive to get the geography correct, capture that time in history and use real events happening then for the backdrop. I consult maps, newspapers and magazines of the day, have Paris phone books (yellow and white pages) of the mid 90s so I can see what shops were there at that time. If you write about a real place, you need to get it right. It’s a challenge that I love.

Have you had to do any special research to get the setting—or certain aspects of a particular book—just right?

Research is the best part of my writing job, as I tell my husband—I have to go to Paris. How else can I get the details right? Lucky for me he agrees and is supportive.  For me, it’s important to know the quartier of Paris I write about in a tangible way. I want to walk in the streets and see how they look like in the morning, smell the lilacs in blossom, hear the church bells and high heels clicking on the cobbles, watch a sunset in Jardin Luxembourg, take the Metro like Aimée and discover where I can set a murder. Hide a body. Logistics are important in the City of Light, which is a densely populated metropolitan area. I research at archives, libraries, track down records, interview people who lived through a certain era in Paris or in the district I’m writing about. It’s important to meet and talk with les flics, police, private detectives, medical pathologists to get the details correct, to find if details for a story line would be plausible in the 90s Paris I write about. Often they tell me about their investigations, and I’ve used real life cases as a basis which I fictionalize. I talk with cafe owners, to bus drivers and shop keepers and basically anyone who’ll talk with me, to get the pulse of that district.

I write every day. My laptop moves around the house with me; now it’s on the kitchen counter. After a few hours writing, I take a walk, which is great for letting the subconscious get into gear and usually stimulates a line of dialogue when I get home.

When the summer weather beckons, what strategies do you use to keep your “butt glued to the chair”?

Well, I live in San Francisco, which is fog land in the summer. We put on the heater and I wear sweaters when I write. It’s a foggy and wintery feeling so I stay warm and keep my fingers moving. I think it’s helpful to set writing goals every day—i.e., a certain amount of pages, a specific amount of time, or writing a scene with dialogue or the motive for a character, whatever works for you. Then once you get going it flows and you’ve often surpassed the goal you’ve set.

Write the story you are passionate about, the one you have to tell.

Readers would love to know what’s next for you, Cara.  Do we have another Aimée Leduc novel to look forward to?

Thank you for asking. I’ve sent the next Aimée Leduc novel, Murder in Saint Germain to my editor. Set in 1999 on the Left Bank, Aimée is investigating in Saint Germain, an area I’ve wanted to write about for a long time. The story came from a retired female Brigade Criminelle (elite homicide squad in Paris) officer who’d been seconded to the Hague to investigate Serbian war crimes for the Hague’s tribunal. I’m crossing fingers my editor likes it.

Cara Black writes the New York Times and USA Today bestselling Aimée Leduc Investigations set in Paris. Her 16th foray, Murder on the Quai, is a prequel to the series. She’s been nominated for mystery awards, translated into 7 languages and received the Medaille de la Ville de Paris in recognition for contributions to French Culture. She lives in San Francisco with her husband and visits Paris frequently.