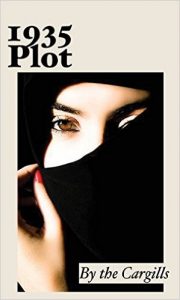 Find out what happens when Colonel Sir Edward Ware and Dora, Lady Ware, confront the Nazis in the 1930’s. It all comes to a climax in 1935 Plot in the form of a female vamp, hired by none other than Adolf Hitler himself, to do in Lady Ware at the very first opportunity. The vamp’s to steal the Lawrence maps from Lady Ware’s husband, Colonel Sir Edward Ware, using any means in her arsenal of tricks. The maps are worth a king’s ransom. They are the key to world domination. Hitler knows it.

1935 Plot is the second volume in the Edward Ware Thrillers At War Series. Reserve your copy today.

1935 PLOT is available from Amazon.

A Ripping Yarn! by Gordon Williams on Amazon UK:
This a refreshingly different read in the mould of the period in which it is set, which tells of the continuing adventures of Sir Edward Ware and his fiancée, now wife, Dora as they tangle with villains and not so villains in their determination to guard the critical Lawrence Maps which hold the key to dominance of the Middle East. Lawrence of Arabia and Winston Churchill hover in the background as murder and mayhem keep the pages turning. There is a gentler side too as tension rises between the newly weds

Raegan on Goodreads:
I loved this book! I would have gave it more stars but this is not something that I would normally read. I loved the first 24 pages- it had lot’s of detail and gave me goosebumps while reading it.

Linda, an active member of International Thriller Writers, has 63 thrillers published in the U.S., Britain, Italy, and Germany — half a million books in print. She’s been published by Cora Verlag (Harper Collins Germany), Scholastic USA, Scholastic UK, and Harper Collins USA. She is the author of The Surfer published by Scholastic USA and Scholastic UK in the Point Horror line. The young adult mass market paperback sold 200,000 copies in the US, UK, in Germany, and in Italy. School Library Journal called it “a taut and evocative story” and said that “readers will become immersed in the challenge between good vs. evil.” The Sunday Independent in Dublin said of The Dark I: “Teens rarely need an excuse to stay up late, but The Dark by Linda Cargill (Scholastic 7.25) would give pause for thought to even the most steely-nerved youngster. A genuinely gripping horror story. Approach with caution.”