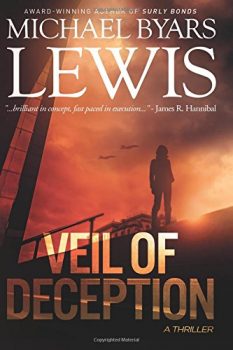 What if the company building America’s most expensive weapons system was secretly owned by one of our enemies?

For years, Air Force Captain Jason Conrad flew and instructed in the supersonic T-38. Despite his decline into a self-destructive lifestyle, he was considered one of the best instructors on the base. Following a terrifying jet crash, Jason finds himself on a very short list of people on their way out the door. It is a surprise to everyone when he is assigned to the home of the U.S. Air Force Flight Test Center. Jason should have known that in a ‘one mistake Air Force’ where you ‘do more with less’, everything would not be what it appears.

Attached to a secret project with a shadowy contractor, Jason is caught between two complications; an overbearing, retired general determined to see him fail; and an aggressive television reporter who wants him in prison. When a ghost from the past shows up and a beautiful, yet mysterious woman enters his life, Jason soon discovers his special project has more secrets than anyone knows about . . . and it could cost him his life.

VEIL OF DECEPTION is available from Amazon, iTunes and the author’s website.

“. . . a Firefox for a new generation. This is one thriller that fans of Cussler, Clancy, and Flynn will not want to miss.” – James R. Hannibal, Author of the Nick Baron covert ops series

“. . . hits all the right notes while establishing Lewis among the best in the genre . . .” – Bella Wright, Bestthrillers.com

“. . . a riveting, timely story that will entertain and frighten you at the same time . ..” -Joseph Badal, Best-Selling Author of Death Ship (Danforth Saga #5)

“A fly by the seat of your pants page turner and not to be missed.”- Manhattan Book Review

“Lewis set up quite a tightrope to walk with Veil of Deception, and with relatively few wobbles, he makes it to the other side with style.” -San Francisco Book Review

“. . . Lewis clearly demonstrates that he has the skills to compete with some of the top thriller and intrigue writers of today.” – Anne-Marie Reynolds, Readers’ Favorite

Michael Byars Lewis, author of the award winning thriller, SURLY BONDS, is a former AC-130U Spooky Gunship Evaluator Pilot with 18 years in Air Force Special Operations Command. A 25-year Air Force pilot, he has flown special operations combat missions in Bosnia, Iraq, and Afghanistan. He served as an Expeditionary Squadron Commander for AC-130U combat operations in Iraq and spent his final assignment on active duty instructing and mentoring the next generation of gunship pilots at the Air Force Special Operations Air Warfare Center’s schoolhouse for flight instruction, the 19th Special Operations Squadron. Michael is currently a pilot for a major U.S. airline.

Active in his community, Michael has mentored college students on leadership development and team-building and is a facilitator for an international leadership training program. He has teamed with the Air Commando Foundation, which supports Air Commando’s and their families unmet needs during critical times.

While his adventures have led to travels all around the world, Michael lives in Florida with his wife Kim and their two children, Lydia and Derek.