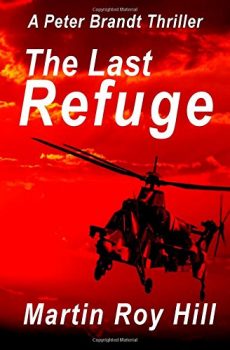 Iraq, 1991: Operation Desert Storm. In a terrible friendly fire incident, a U.S. helicopter massacres a small convoy of American MPs. Among the dead: a mysterious American civilian engineer discovered by the soldiers behind enemy lines.

San Diego, CA, 1993: A freelance journalist is hired to write a story about a wrongful death lawsuit filed by the dead engineer’s widow against the government and the defense contractor he worked for. The problem: the government insists the lawsuit does not exist, and the contractor claims the engineer did not work for them. Worse, someone is willing to kill to keep it that way.

Peter Brandt, the war-scarred journalist hero of Empty Places, returns in this story of greed, betrayal, and government secrets. Can Peter expose the truth without becoming another victim of the wartime tragedy?

THE LAST REFUGE is available from Amazon.

“All round, this is a first class performance from a writer at the very top of his game and a series that … has the legs to run and run.” — SHOTS Crime & Thriller Ezine

“Twists and turns, all very well done…Gotta hand it to Hill — he can think up a good story.” — Crime Book Junkie

Martin Roy Hill spent more than 20 years as a staff reporter and editor for newspapers and magazines, before becoming a Navy analyst specializing in battlefield medical operations. His freelance credits include Reader’s Digest, LIFE, Newsweek, Omni, American History, Coast Guard Magazine, Retired Officer Magazine, the Los Angeles Times Sunday Opinion Section, and many more.Much of his freelance work involves historical topics, especially military history. He was a lead contributor to the 1995 WWII anthology, “From Pearl Harbor to Nagasaki: America at War,” published by the Retired Officer Association (now called the Military Officer Association). He also contributed to the American Civil War anthology “Gettysburg: Three Days that Saved the United States,” published by I-5 Publishing.Martin’s short stories have appeared in such publications as Alfred Hitchcock Mystery Magazine, ALT HIST: The Journal of Historical Fiction and Alternative History, San Diego Magazine, San Diego Writer’s Monthly, and the Plan B Mystery Anthology and webzine. His first book, DUTY, was named the Best Short Story Anthology/Collection by the San Diego Book Awards Association (SDBAA). His first novel, The Killing Depths, was a 2013 finalist for the SDBAA Sisters In Crime Mystery Award, as was Empty Places in 2014. Eden was a finalist for the SDBAA’s Best Science Fiction book in 2015.A veteran of the Coast Guard and Navy reserves, Martin now serves as executive officer of a state military police battalion in the California State Military Reserve, a component of the California National Guard. Hill has more than 13 years experience in maritime and wilderness search and rescue and disaster response, and taught wilderness survival and first aid.