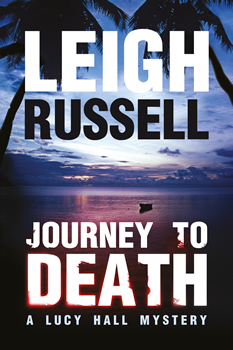 Leigh Russel is no stranger to series writing—for some time she’s been delivering two manuscripts a year, one each for her Geraldine Steel and Ian Peterson series’. But with JOURNEY TO DEATH, Russel adds a new character to her regime, introducing Lucy Hall, a young woman looking to leave her worries behind—but finding new, potentially deadly troubles in the seemingly idyllic tropical paradise of Seychelles.

Here, Russell takes time out of her now even busier writing schedule to answer some questions for The Big Thrill.

I really enjoyed the slow build of JOURNEY TO DEATH, almost as though the suspense and tension itself was a “journey.” It would be easy to launch into action action action as many thrillers do—why did you decide to tell the story in this way?

Most of my books begin with dramatic action, but this one is different. My story was inspired by a first-hand account of life under a coup d’etat in the 1970s in the Seychelles, which provides the background to the main story, which takes place in the present day. In addition, setting the action on an island affects the narrative, reflecting the leisurely pace of life in the Seychelles. Once the mystery begins to take hold, the pace speeds up.

Your characters are notoriously well developed—what do you want readers to know about Lucy before they dive into this new series?

Lucy Hall is only twenty-two in JOURNEY TO DEATH, and just beginning to emerge as an independent adult. Recovering from a disastrous broken engagement, she is forced to reconsider her intentions in life. In this vulnerable frame of mind, she is thrown into a challenging situation. As Lucy learns about herself, through the course of the narrative, the reader also learns about her character.

Your books have been highly praised by well-known authors in the field—endorsement from Jeffery Deaver even! What is the best—and worst—piece of writing advice you’ve received? What are the “words of wisdom” you would pass on to aspiring authors?

Many great crime writers have been generous with their praise, including Jeffery Deaver, who was kind enough to call me “a brilliant talent,” and Lee Child, who describes my books as “unmissable.” I’m not sure that I’ve ever received any really bad advice. As far as good advice is concerned, in my opinion, no one has yet improved on the advice William Faulkner gave to aspiring writers: Read, read, read. Read everything—trash, classics, good and bad, and see how they do it. Just like a carpenter who works as an apprentice and studies the master. Read! You’ll absorb it. Then write. If it’s good, you’ll find out. If it’s not, throw it out of the window.

With three series on the go—assuming there are new books in each—you’re forced to be prolific. What tips do you have for keeping your butt in the chair?

I always say the best cure for writers’ block is a publisher’s deadline. Even without that, now that I’ve discovered my passion for writing, I can’t imagine I’ll ever stop! My tip to any aspiring writer who struggle to keep going is to set yourself a deadline, and try to keep to it.

Setting is clearly important to you and your descriptions are enough to awaken all of the senses. What kind of research is involved to create such awe-inspiring detail? Do you visit the locations of your books?

I always visit the locations where my books are set. A lot of research can be completed online, but there are details that can only be ascertained on the spot. During my visit to the Seychelles I spent several afternoons at the police headquarters in the capital, researching local police procedures, and also spent time at the British High Commission, discussing what might happen there if the situation in JOURNEY TO DEATH were ever to arise. This kind of local knowledge can only be learned from people who live and work there. Sights can be viewed online, but to experience the sounds and smells, and the atmosphere of a location, really demands a visit. And as my husband likes to point out, someone had to research what it’s like to sip cocktails on the beach at sunset in Beau Vallon Bay, gazing out over the Indian Ocean.

The second title in the Lucy Hall series will be published in September, set in Paris, France, followed by the third Lucy Hall early in 2017, set in Rome, Italy. And the ninth Geraldine Steel will also be published in 2017. 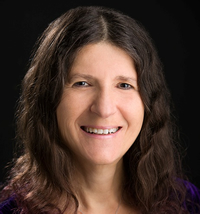 Leigh Russell is the author of the internationally bestselling Geraldine Steel and Ian Peterson crime series. She studied at the University of Kent, gaining a master’s degree in English. She has a Diploma in Specific Learning Difficulties from the British Dyslexia Association, and a Certificate in Teaching English as a Foreign Language. For many years she taught English at secondary school, specialising in supporting pupils with specific learning difficulties. She is married, has two daughters, and lives in north-west London. In addition to writing, she guest-lectures for the Society of Authors, universities and colleges, and runs regular creative writing courses for the prestigious Writers Lab in the UK and Greece. She also runs the manuscript assessment service for the CWA.

To learn more about Leigh, please visit her website.