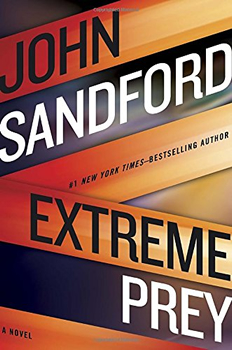 Back in the early 90s, John Sandford’s son was driving through Omaha in the evening when his car struck a deer head, and the animal’s horns punctured his tire. Knowing his limited-use spare wouldn’t get him through Nebraska, he called his father, already a bestselling thriller writer, for advice.

Using an early mapping program—created long before Google—Sandford was able to navigate directions to an open tire store. His son was back in business within 15 minutes.

The event marked a significant shift in Sandford’s thinking: Technology had taken a huge step forward, and if he wanted to stay relevant, he needed to get on board.

Now, with the release of EXTREME PREY, the 26th book in the Lucas Davenport series, Sandford once again finds himself at a crossroads. In an increasingly fickle marketplace where even long-standing characters have a shelf life, how will he keep the series—and his star protagonist—fresh?

“I thought about killing his wife,” Sandford says. “We actually took a vote on it at a book event and more than 90 percent of the audience voted not to kill her. I guess his wife is too popular.”

That might not seem like a conundrum to some, but it poses a problem for Sandford, who feels his latest books lack some of the romance his readers have come to expect. Davenport can’t fool around on his wife—he’s not that kind of guy—but marriage often reads a bit on the dull side, particularly with thrillers.

If you’re having heart palpitations about the thought of Lucas losing his better half, Sandford admits he’s still mulling over options and there’s no cause for concern—yet. But fans of his Davenport series will note a few missing familiars in EXTREME PREY.

Suddenly unemployed and scrambling to find his identity, Davenport joins the campaign staff of his friend the governor in a race for presidency. Seems like a good time until Davenport realizes the governor has a target on his back. The threat propels Davenport into action—but in this book, and for probably the next couple, he’ll be without the cast of side characters that have become increasingly popular to readers.

“I was losing track of who Lucas was,” Sandford says. “He was more a manager than a street cop, and I wanted to bring him back to that.”

This shift is another way to keep Davenport’s character evolving while still maintaining the characteristics of the PREY books that have shot (all of) them to the top of the New York Times bestseller list.

In EXTREME PREY Davenport faces personal demons, but also goes up against a dangerous mother and son team who, by circumstances beyond their control, have gone “off the rails.”

“This is a woman who has had a number of tragedies in her life, through no fault of her own,” Sandford says. “And even though she’s crazy, there’s a reason for it. You can almost understand how she got there.”

It’s a type of “Ripped from the Headlines” story that speaks to the current political and economic climate in the United States, where Sandford says a free-floating anger can be felt in a serious way. It’s a world in which “someone like Donald Trump can get nominated.”

Sandford is no stranger to political strife. In his 20-year career as a Pulitzer Prize-winning journalist, he’s covered several race riots and was a reporter at the Miami Herald during the 1972 political conventions where he was chased through the streets by motivated rioters. These are only some of the adventures—many of them dangerous—that have paved his life’s path.

But while he’s long since stopped writing for newspapers and magazines—who has time while penning three books a year?—the journalist is still alive and well in Sandford. He even sets up his office like a newsroom.

“In the newspaper world, they don’t pay you to have writer’s block,” he says. “I go to work every day. I only skip when I’m on vacation, and I haven’t had a vacation in a couple of years.”

It’s this kind of work ethic that has guided Sandford’s careers as both a reporter and a novelist, but it’s also the advice he gives to aspiring writers, especially those with a background in journalism.

“If you pick a genre and you’re a competent journalist, you can teach yourself to become a novelist,” he says. “Most of the newspaper guys I know have the raw ability—but they lack the confidence. You have to have the bull-headedness to get you there. I wrote a few books that failed.”

Hard to believe, perhaps, from an author with more than 40 books to his credit, 35 of them hitting the bestseller charts, and an iron-clad plan to keep writing until “they carry me away.” 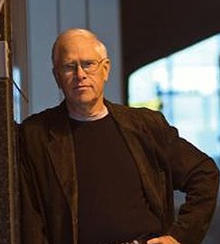 John Sandford was born John Camp on February 23, 1944, in Cedar Rapids, Iowa. He attended the public schools in Cedar Rapids, graduating from Washington High School in 1962. He then spent four years at the University of Iowa, graduating with a bachelor’s degree in American Studies in 1966. In 1966, he married Susan Lee Jones of Cedar Rapids, a fellow student at the University of Iowa. He was in the U.S. Army from 1966-68, worked as a reporter for the Cape Girardeau Southeast Missourian from 1968-1970, and went back to the University of Iowa from 1970-1971, where he received a master’s degree in journalism. He was a reporter for The Miami Herald from 1971-78, and then a reporter for the St. Paul Pioneer-Press from 1978-1990; in 1980, he was a finalist for a Pulitzer Prize, and he won the Pulitzer in 1986 for a series of stories about a midwestern farm crisis. From 1990 to the present he has written thriller novels. He’s also the author of two non-fiction books, one on plastic surgery and one on art. He is the principal financial backer of a major archaeological project in the Jordan Valley of Israel, with a website at www.rehov.org. In addition to archaeology, he is deeply interested in art (painting) and photography. He both hunts and fishes. He has two children, Roswell and Emily, and one grandson, Benjamin. His wife, Susan, died of metastasized breast cancer in May, 2007, and is greatly missed.

To learn more about John Sandford, please visit his website.