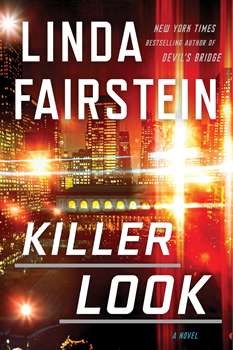 Scratch the surface of an iconic New York City landmark and you are likely to find a dark underside.  The grand Metropolitan Opera House at Lincoln Center was the scene of the backstage murder of a young musician, which occurred during a ballet performance.  Roosevelt Island, home to the stunning Four Freedoms Park, once was known for its hospital and nearby “deadhouse”– a morgue to which Manhattan’s smallpox victims were ferried in huge numbers.  And the Museum of Natural History used to be the repository of millions of human bones, stolen from graves of Native Americans and African villagers over decades, a century ago.

When I started to write my Alexandra Cooper series of crime novels featuring a New York prosecutor, I decided to make the city itself a character in the books–to set each story against the background of familiar places that appear to be so benign in our everyday lives, whether we are residents or tourists or readers in far-away places.  I love exploring the sinister elements that helped make these locations so interesting and enduring.

In my latest thriller, Devil’s Bridge, the action takes place along the majestic Hudson River, which forms Manhattan’s western border.  Alex Cooper and Mike Chapman play out an adventure that stretches along the shoreline and takes the reader out into New York Harbor to understand how the Statue of Liberty came to be built on top of a fortress meant to defend the city in the War of 1812.  But the real secrets that attracted me to the river are farther north, at the foot of the George Washington Bridge.  A classic children’s book written in 1942, The Little Red Lighthouse and the Great Gray Bridge, alerted me to the spit of land that juts out into the Hudson below the eastern tower of the bridge.

Jeffrey’s Hook is the name of that treacherous point–the narrowest part of the river between Manhattan and New Jersey–and the site of Fort Washington, where the Americans were defeated during the Revolutionary War, with a loss of 59 troops.   So many ships were wrecked on that very curve that it became necessary in the 1800’s for the Coast Guard to hang lighted poles out over the Hudson–very low-tech days!–to warn off ships.  In 1921, the red lighthouse was decommissioned in New Jersey and moved to Jeffrey’s Hook, where it saved lives for more than a decade.  When the bridge tower was erected in 1931, the handsome little lighthouse became obsolete.

The site of the old fort and the lighthouse are attractions to this day, and in the park one can still see remains of the giant iron hooks sunk into boulders at the foot of the bridge to anchor ships during Revolutionary times.  I couldn’t think of a more chilling, remote outpost on the water’s edge at which to set the final scenes in Devil’s Bridge.

Coop’s next adventure, KILLER LOOK, debuts in July.  To write the book, I wanted to go behind the scenes of this city’s fashion industry, past the catwalks and the models, to see how the business intrigue in this high-stakes world drives the international success of our most famous designers.  The garment district was once a thriving part of this city’s financial foundation, but it has recently continued to shrink now that so much of our manufacturing is outsourced overseas.

The mix of the creative side of fashion’s geniuses with the bruising business of getting the clothing from the factory to the runway to the couture houses is high-pressured, often drug-fueled, and conducive to making strange bedfellows.  The greatest surprise to me in my research on Seventh Avenue was the fact that the Garment Center’s first successful enterprise after the introduction of commercial sewing machines in the 1850’s was the production of uniforms for slaves on Southern plantations.  That’s another dark secret from the city’s past.

My favorite place in New York, hands-down, is the great public library on Fifth Avenue, guarded by her two marble lions, Patience and Fortitude.  Several years ago I set one of Coop’s mysteries there, in Lethal Legacy.  For an institution with such uplifting and elegant research surrounds, I was shocked to find out about the background of the NYPL’s home.  Not only is it built on top of a Revolutionary War potter’s field (yes, the bodies were removed for reburial), but the millions of dollars of treasures stored there have given rise to some remarkable thefts internal intrigue.

Since I revisit often, and most especially love the Map Division with its collection of thousands of antiquarian maps and atlases, I decided to turn the library into a crime scene again.  This year, I finally fulfilled my adolescent fantasy of creating a young sleuth in the style of Nancy Drew.  My new series featuring twelve-year old Devlin Quick will launch in November with her first caper, INTO THE LION’S DEN.

I took a fresh look at the NYPL through a kid’s eyes, and her puzzle-solving skills also led me to Police Headquarters with all its dazzling crime-fighting tools, then to an underground “ghost” station in the city’s subway system.

Every now and then, a fan contacts me through my website to ask whether I intend to write a tour book of the landmarks I’ve embedded in each of Alex Cooper’s crime novels.  It’s a fine idea, and a wonderful way to highlight my use of mystery to bring to life so much of New York City’s history. 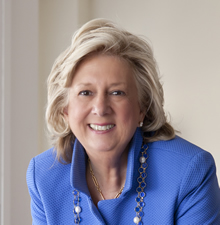 Linda Fairstein, former prosecutor and internationally best-selling crime novelist, is the author of the Alex Cooper series from Dutton.   Her latest book is DEVIL’s BRIDGE, which will be followed on July 26 by the 18th entry in the series, KILLER LOOK.  Fairstein recently announced that she is launching a new middle grade mystery series featuring kid sleuth Devlin Quick.  The debut novel – INTO THE LION’S DEN – will be published on November 1. 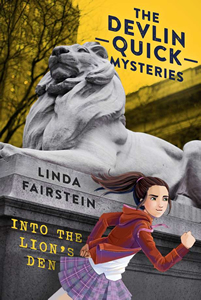 Watch out, Nancy Drew—Devlin Quick is smart, strong, and she will DEFINITELY close the case in this thrilling new mystery series for girls and boys from New York Times bestselling author Linda Fairstein

Someone has stolen a page from a rare book in the New York Public Library. At least, that’s what Devlin’s friend Liza thinks she’s seen, but she can’t be sure. Any other kid might not see a crime here, but Devlin Quick is courageous and confident, and she knows she has to bring this man to justice—even if it means breathlessly racing around the city to collect evidence. But who is this thief? And what could the page—an old map—possibly lead to? With her wits, persistence, and the help of New York City’s finest (and, okay, a little bit of help from her police commissioner mother, too), Dev and her friends piece the clues together to uncover a mystery that’s bigger than anyone expected—and more fun, too.

With all of the heart-pounding excitement that made her internationally bestselling Alexandra Cooper series a hit, Linda Fairstein paves the way for another unstoppable heroine . . . even if she is only twelve.