A Legal Thriller With Heart 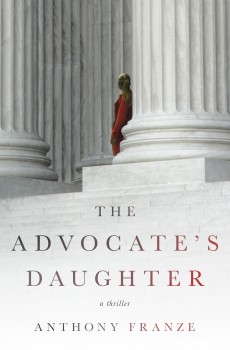 In THE ADVOCATE’S DAUGHTER, author Anthony Franze—a lawyer at a major Washington, DC law firm and frequent media commentator on the Supreme Court—takes readers behind-the-scenes of the country’s highest court, in a murder mystery that has as much heart as it has suspense.

Sean Serrat, a prominent DC lawyer, seems to have it all: married to the love of his life, blessed with three great kids, and even a possible U.S. Supreme Court nomination on the horizon. That is, until Sean’s daughter is found murdered in the library of the Supreme Court. Serrat is rocked to the core.  Not only does his daughter’s death shatter his picture-perfect life, but the killing could also be connected to his potential nomination—or a dark secret from his past.

Secrets and law and more secrets. Each surprising, each lurching story and motive in a different direction. Many an author has built a successful career writing traditional legal thrillers with these elements in mind, and Franze could have left it at that. But the real root of this thriller with dueling legal and domestic angles is family.

“I love thrills and twists, but the books I connect most with have an emotional component,” says Franze. “As a writer, I’m always trying to make an emotional connection with readers—I want readers to care about my characters, I want them to feel. That’s what I tried to achieve with THE ADVOCATE’S DAUGHTER.”

I’m not ashamed to admit that Franze made me cry—more than once. Because murder mystery aside, this novel is about the lengths people will go to protect the ones they love. From Franze’s meticulous attention to detail, careful plotting and superb character development, through to his touching acknowledgments, one gets the sense that Franze—much like his protagonist—would go the distance.

Perhaps, in part, this is because of his life experiences. This month for The Big Thrill, I had the pleasure of interviewing Franze about life before—and after—THE ADVOCATE’S DAUGHTER.

You’re obviously not the first lawyer to author a book, and given the nature of law, it’s an obvious choice for suspense writing. Which came first—your love of law or a passion for writing?

The writing was there early on, but it started out as writing music and playing in rock bands, from the age of thirteen. But by my early twenties, I took some pre-law courses in college and learned that lawyers could use words to do powerful things—help people, make social change, level the playing field—and it inspired me to go to law school.

A few years out of law school I tried my hand at fiction. It was after my first son was born, and I was up late at night with him. For some reason—maybe the haze of sleep deprivation—I had an idea for a story and started writing it down. And I rediscovered the feeling I’d had with music—the incredible experience of creating something out of nothing—and I’ve been doing it ever since.

“Write what you know” is perhaps somewhat cliché, and yet, it works for you—your behind-the-scenes knowledge of the Supreme Court is a fantastic hook. What inspired you to write what you know?

Actually, that’s probably only half true for me.  Some of my favorite writers have said that “write what you know” is a terrible rule, and I tend to agree. I’m an appellate lawyer and spend much of my day in my office writing briefs. That’s what I know day to day, and who’d want to read about that? On the other hand, I know the legal and D.C. setting I’m writing about, so I try to bring an air of authenticity to my settings, history, and law. The rest is all made up. That’s the fun of writing fiction.

You’ve handled more than 30 cases in the Supreme Court. How has the high-court community responded to your novels?

It’s been incredibly supportive. I’ve had notes from judges, government officials, and members of the Supreme Court bar, as well as from the press corps. I hope that’s because I get the setting and details right, and they understand the rest of it—the murder and mischief—is to keep the pages moving.

Do you have a favorite Supreme Court case of all time?

One of my favorites is a famous case from the 1960s, Gideon v. Wainwright. The Supreme Court ruled that everyone—rich and poor alike—has the right to counsel when the government seeks to lock them up. I remember watching the movie about the case in an elementary school class.  It left quite an impression, and it’s not a coincidence that I’m now working at the law firm that represented Clarence Earl Gideon in the Supreme Court. Lawyers get a lot of flak, but after twenty years I still think it’s a noble profession. People forget that Shakespeare’s line, “Let’s kill all the lawyers,” was spoken by a rebel—someone who wanted to get rid of those who could protect the rule of law.

Music is important to your protagonist. How much influence does music have in your writing process?

Surprisingly, I don’t listen to music when I write, and I don’t feel like it is a key component to the writing process. I do think that certain songs or bands can evoke a feeling—capture a moment or a time—so I try to use that in my novels. For my fourth book, music will play a larger role. I have a character who was in a successful eighties rock band and is trying to recapture his former fame. For research, I interviewed some real-life eighties rock stars, which was a blast.

What’s next for you?  I’m already anxiously awaiting your third book—and I know after readers finish THE ADVOCATE’S DAUGHTER, they will be as well.

I have another standalone from St. Martin Press coming out next year. I don’t like to talk about the work in progress for fear of taking the energy out of it, but I’m excited about the book. In the meantime, I’ll be out spreading the word about THE ADVOCATE’S DAUGHTER, including an event hosted by Georgetown Law School’s Supreme Court Institute, ThrillerFest (of course), as well as many other events. 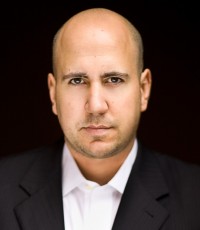 Anthony Franze is a lawyer at a prominent Washington, DC law firm, and has represented clients in more than 30 cases before the U.S. Supreme Court. He has garnered national recognition as a “superb advocate” (The Legal 500) and been named to the “DC Super Lawyers” list for appellate law. The New York Times, Washington Post, Chicago Tribune, and other news outlets have quoted or cited Anthony concerning the Supreme Court, and he has been a commentator on high-court issues for The New Republic, Bloomberg, The National Law Journal, and other news outlets.

To learn more about Anthony, please visit his website.