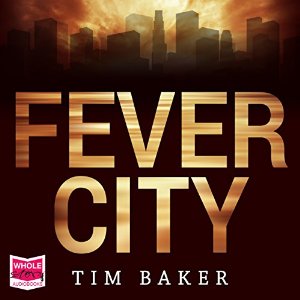 Nick Alston, a Los Angeles private investigator, is hired to find the kidnapped son of America’s richest and most hated man.

Hastings, a mob hitman in search of redemption, is also on the trail. But both men soon become ensnared by a sinister cabal that spreads from the White House all the way to Dealey Plaza.

Decades later in Dallas, Alston’s son stumbles across evidence from JFK conspiracy buffs that just might link his father to the shot heard round the world.

This is a novel packed with tough-guy poetry, deeply felt emotions and startling images . . . A superb debut novel. A direct hit – Jeff Noon, The Spectator

A Must Read . . . A tale of dark power, corruption and political conspiracy – Daily Express

A blistering debut of great ambition and scope – Eva Dolan, author of After You Die

A mighty impressive debut . . . I was blown away – Maxim Jakubowski, Love Reading

Baker’s scene-painting and dialogue are accomplished, and the conspiracy theory that emerges is ingenious – John Dugdale, The Sunday Times

The mood is Chandleresque, the dialogue snappy, the femme is fatale . . . Baker weaves his own intrigue around the death of Kennedy . . . This is a complicated book about complicated people with a remarkable pay-off – Sue Turnbull, Sydney Morning Herald, Australia

Missing Mad Men? Tim Baker’s sprawling, ambitious and atmospheric Fever City is the thriller for you . . . This debut author is the natural successor to such hallowed crime writers as Raymond Chandler and James Ellroy . . . Thanks to its sheer scale this is also the perfect holiday read . . . Story-telling at its most ambitious – Stylist Magazine

Complex, impressive and humming with tension – Helen Giltrow, author of The Distance

Born into a showbiz milieu in Sydney, Tim Baker left Australia to travel in his early 20s and lived in Rome and Madrid before moving to Paris, where he wrote about jazz and worked in film. He later ran consular operations in France and North Africa for the Australian embassy, liaising with international authorities on cases involving murder, kidnap, terrorism and disappearances. He currently lives in the South of France with his wife, their son and two rescue animals, a dog and a cat. He is working on several novels, including a sequel to FEVER CITY. @TimBakerWrites