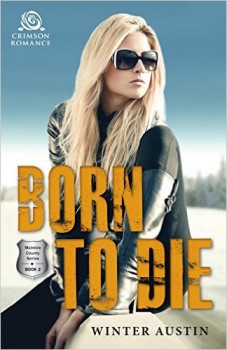 Trouble’s on the run in rural Eider, Iowa, and Deputy Cassy Rivers’s heart is in the line of fire. Two years ago, she barely escaped a harrowing experience at the hands of a maniac—and not without scars. Now a series of random robberies leads to the brutal death of a fellow officer, and she must put her trust in the one man who broke her heart.

FBI agent Boyce Hunt knows commitment isn’t for men with pasts like his. He left Cassy once to protect her from the blackmail and manipulation he faces from his mother’s criminal enterprise. But when they reluctantly partner up to capture the modern Bonnie and Clyde terrorizing McIntire County, their attraction flames to life once more, pulling Boyce between two loyalties.

Will they risk their hearts again, even if it means losing everything?

“Austin’s series opener has much to entertain readers… it paints a picture of a strong, fearless woman with a sympathetic plight.” — Library Journal

BORN TO DIE is available from Amazon.

“Atonement is a gripping start to Austin’s new romantic suspense series.” — RT Book Reviews
“To have such a girl-power-driven novel, rooting for her happily ever after with Con was as natural as the changing of the seasons.” –InDTale Magazine, 5 stars

“Once in a while you come across a book that simply grabs your attention not letting you go. This is one of those books.” — 5+ stars, Romancing the Book

“Nic is just wow! …This was a great read and I was caught up in the ride … There were plenty of twists and turns that kept me on the edge of my seat.” –4 stars, Night Owl Reviews

Winter Austin perpetually answers the question “were you born in the winter?” with a flat “nope.” Living in the middle of Nowheresville, Iowa, with her husband, four teenagers, and two crazy dogs, Winter is trying to juggle a career while writing deadly romantic thrillers.

The Better Part of Valour by Rex Burns