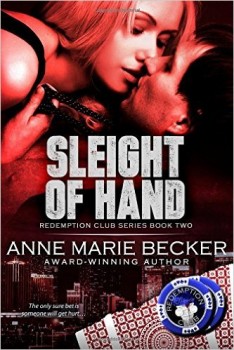 Some skills never fade…
Raised by con artists, Emily Moore has done her share of manipulating others to make ends meet. She’s working hard to go legit and make up for her past, but she still knows how to spot an easy mark. And when to walk away from a bad situation. Emily learned life’s lessons the hard way, and now a tough exterior hides her one weakness—her love for the man who left her.

Some hurts never heal…
After a high profile murder, Detective Adam Wilde’s brother disappears, becoming both the Las Vegas Police Department’s primary suspect and the real killer’s target. Tanner has hardly been an upstanding citizen, but Adam believes he’s innocent. He suspects an underground group called the Redemption Club, which trades in dark deeds, is behind the murder, and it’s essential he finds his brother before the Club does. If anyone can think like his brother, Tanner’s childhood friend Emily can. But first, Adam will have to repair their friendship and make up for hurting her—even if his rejection was intended to protect them both.

Some gambles are worth the risk…
Their hearts are telling them to let go of the past, but trust has never been easy for either Emily or Adam. It’ll take a common purpose, and an undeniable passion, to reunite them. To find Tanner and defeat the head of Redemption Club, they’ll need each other—and they’ll need to come up with the con of their lives.

SLEIGHT OF HAND is available from Amazon, iTunes and Kobo.

“Another great addition to the series. I love that this series walks the fine line between right and wrong – There are no lilly white innocents but even those that walk the line can have good hearts and intentions.” –Amazon reviewer

“This is the second book of the Redemption Club series and didn’t let me down. Anne Marie Becker knows how to write romantic suspense.” –Amazon/Goodreads review

Anne Marie has always been fascinated by people—inside and out—which led to degrees in Biology, Chemistry, Psychology, and Counseling. Her passion for understanding the human race is now satisfied by her roles as mother, wife, daughter, sister, and award-winning author of romantic suspense.

She writes to reclaim her sanity.

Find ways to connect with Anne Marie at www.AnneMarieBecker.com. There, sign up for her newsletter to receive the latest information regarding books, appearances, and giveaways.

3 Truths and a Lie by Lisa Gardner