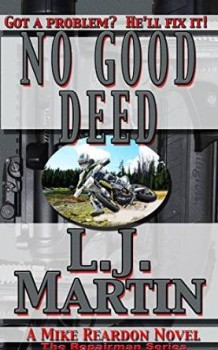 Going after some ruthless kidnappers, who want NATO’s secrets, is one thing…going into Russia is another altogether. But when one of Reardon’s crew is being held, he says to hell with it, no matter if he’s risking starting World War 3! Why not add the CIA and the State Department to your list of enemies when your most important job is staying alive hour by hour, minute by minute. Hard Boiled Action Adventure Thriller from L. J. Martin

NO GOOD DEED is available from Amazon.

Something for everyone who loves a great read
By Mary Gramlich VINE VOICE on November 11, 2015
Format: Kindle Edition Verified Purchase
Mike Reardon has been in too many tough spots to ever fear the unknown. But being asked to go into the bowels of Mother Russia and retrieve the kidnapped daughter of a high ranking military official even gives him hesitation. Well a little hesitation until they give him the number monetary dollars he will be paid to do this job, any delays are gone.

With his team of experts in place Mike moves from one piece of the recovery to the next with the mindset that everything was going too well, something bad is going to happen. When you expect trouble it tends to show up and when it did everything start exploding, literally all around them. The rescue had a huge glitch with the kidnappers turning out to be much worse than described and the main target having escaped but not falling into the right hands, again.

Mike never walks away from a job or a good steak and in this latest Repair Man book the action never stops and the writing is as always amazing.

L. J. Martin is the author of over 40 thriller, mystery and western novels and a number of screenplays.  He lives in Montana with his NYT bestselling romantic suspense author and wife Kat Martin.  The Martins travel the world over researching their work.  They winter on the central California coast.