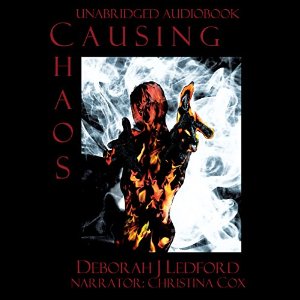 From the author and narrator of the Anthony Award Nominee for Best Audiobook, CRESCENDO.

Inola Walela’s final days as a Bryson City police officer take a perilous turn when her Cherokee childhood friend becomes lead suspect in the disappearance of four women. The investigation entangles Inola and her fiancé, Sheriff Steven Hawk, in a web of deceit as they vie for vengeance, meeting danger head-on in the Great Smoky Mountains of western North Carolina.

“Standing round of applause for this dynamite blast of a thriller.” – Suspense Magazine

Author: DEBORAH J LEDFORD is a 2014 Anthony Award Nominee for the audiobook version of CRESCENDO. Screenwriter, and three-time nominee for the Pushcart Prize, other novels by the award-winning author of the Inola Walela/Steven Hawk suspense thriller series include CAUSING CHAOS, CRESCENDO, STACCATO, and The Hillerman Sky Award Finalist SNARE.

Narrator: CHRISTINA COX is the 2014 Anthony Award nominated narrator of CRESCENDO, best known for her starring roles on numerous television series including Defying Gravity for ABC and Blood Ties for Lifetime, as well as guest starring roles in all of the NCIS series’, Arrow, 24, Motive, and as Officer Zoey Kruger on Dexter. She also appears in the feature films The Chronicles of Riddick, Elysium and Better Than Chocolate.