Amy Shojai’s successful September Day series continues the thrills with the release of SHOW AND TELL, again featuring her popular service dog viewpoint character Shadow, and animal behaviorist, September Day. The author answered a few questions for The Big Thrill about writing such unusual characters and what comes next in her writing career.

Tell us about SHOW AND TELL.

SHOW AND TELL is the third book in the series set in North Texas. The story begins in Lost And Found with September and her service dog. They evade a vengeful cop and race against time to rescue children from a deadly autism “cure.” Over the course of the three books, the relationship between woman and dog evolves from suspicion to trust and finally love, making them stronger—and more vulnerable—to outside forces determined to destroy them. In SHOW AND TELL, the drug ring resurfaces and not only threatens autistic children, but innocent animals as well.

That’s the short version but there’s so much more. I love to incorporate real-life issues in these stories. Over the course of the series, the characters address PTSD and service dogs, Alzheimer’s and autism, trained cats and dog fighting, and much more.

Most readers comment on the rollercoaster ride of the stories. I’m honored the series has been compared to the driving pace of James Rollins thrillers as well as dog-viewpoint characters featured in his Tucker Wayne novels and Robert Crais books with Maggie the war dog, and even to the emotional impact of The Art of Racing In the Rain. But this series is its own breed.

Readers love Shadow’s dog-viewpoint chapters because he is NOT a “talking dog” or trained war dog, but acts and reacts like a real dog, with his own story goals and character arc. And they root for the damaged September as she heals with the help of her furry partner. SHOW AND TELL has elements of mysteries, suspense, and romance but ultimately satisfies readers who enjoy strong, quirky characters, heart-pounding thrills, and stories ripped from the headlines.

I’m ask this question a lot, and my answer is always the same. I write the books that I always wanted to read. But “talking animals” never appealed to me. At the time I wrote Lost And Found, I’d not read any thrillers that portrayed animal characters in the way that made sense to me, as a vet tech and animal behavior expert.

I was already a James Rollins fan when I read his first Tucker Wayne novel, and felt vindicated he’d written a war dog character with respect for its species. I was even further blown away when James Rollins generously gave me cover quotes for my first two books. I’m delighted that my readers often comment they learned something new about their pets, along with being entertained.

What special challenges do you find when including animals in your books?

Readers sometimes assume that the September Day books are mysteries, rather than suspense and thriller novels, but these are not warm-and-fuzzy novel just because animals are included. Or readers are surprised the stories are character-driven tales of people overcoming obstacles that may strike a chord in their own lives.

Another challenge in writing animal characters is the accelerated rate at which a pet ages compared to human characters. Further, most readers (myself included) object to animal characters being killed off in books, but never blink when the human body count skyrockets.

Onstage animal (or kid) death or violence is a line I don’t cross. Each books in the series follows the next within weeks or months rather than years so that animal characters won’t age out too soon. In the first book Lost And Found, Shadow is a nine-month-old service dog in training. SHOW AND TELL, the third book, takes place only three months later.

This is the third book in the series. How is it different than the first two?

In some ways, SHOW AND TELL was more difficult to write than the first two. A reader who liked Lost And Found challenged me to write a novel in which autistic characters were not necessarily victims or bad guys. I also wanted to push September beyond her PTSD and open her up to romance, and to shine a light on advances in veterinary forensics and its applications for solving crimes, especially investigations into dog fighting. Balancing the action with multiple viewpoints, including a child’s point of view proved challenging. SHOW AND TELL once again covers real-life issues, and characters break free of preconceived limitations in ways I hope will both surprise and delight readers. This book by far is my favorite of the three.

So will your next book include pets? What’s next for the series?

Absolutely! Animal characters will continue to be a part of everything I write. I’m still percolating on next steps for September and Shadow.

Thank you, Amy, for speaking with The Big Thrill. 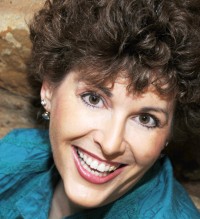 Amy Shojai is a nationally known authority on pet care and behavior, a certified animal behavior consultant appearing on Animal Planet, and the author of 30 nonfiction pet books as well as the September Day thriller series. She’s endlessly inspired by her own smart aleck German Shepherd, Magic; her delinquent cat, Karma; and her 20-year-old Siamese wannabe, Serendipity.

Amy was an ITW Debut Author with Lost And Found, which was followed by Hide And Seek. The newest title SHOW AND TELL brings the story full circle. You can find out more about Amy Shojai’s books on her website or on her Bling, Bitches & Blood Blog.