British author J.S. Law is a former submariner from the Royal Navy and the author of the debut thriller TENACITY, set partially on a nuclear submarine. USA Today bestselling thriller author J.F.Penn interviewed J.S.Law for The Big Thrill. You can watch the video discussion here on YouTube or read the transcript below.

So first of all, tell us a bit more about you and your writing background.

Like most authors, I’ve been writing since I was a child. I even found some fairly amusing emotional poetry that I’d written when I was in my early teens. I used to enter lots of short story competitions, but it was probably about six years ago that I decided I really wanted to be a published author.

Once I’d decided that, I tried to act that way and I started writing a book a year. I would send it out and get it professionally edited and then go through the submissions process. After a conversation with an agent, I realized that having served on submarines for as long as I have, is quite a unique thing. And that was when I decided that I should start writing about submarines. And TENACITY was born, as it were.

What is TENACITY broadly about?

TENACITY follows a female SIB Investigator, Special Investigations Branch of the Royal Navy, into the submarine world. There’s a murder-suicide, and the suicide part of that is on the nuclear submarine. So she has to go in and investigate why this guy killed himself.

Within the UK, we’ve only recently had our first three females go on submarines and at the time of writing, it’s still very much a male-dominated environment. So she’s an outsider, she’s police, she’s a female in an all-male environment, but also, she’s not a submariner. She’s not one of them. And submarines are very much about belonging. It’s very much of a club. So the book is very much about how she goes in there and has to deal with everything that happens.

You were in the Royal Navy and served on submarines. How does your experience feed into the book?

I served in the Royal Navy since I was 16. I actually started off on aircrafts and worked as an aircraft maintainer for almost nine years. Then I moved across to submarines and I just loved it. Going to submarines was just like coming home. So I served the last 12 years of my career on submarines.

I was one of the senior nuclear engineers on board so I was in charge of everything, well, there were four nuclear engineers, but between us, we were in charge of everything from the nuclear reactor plant and the safety operations around that, the propulsion of the engines and gearbox, right down to the toilets, the air systems, the sewage tank. All that fell under our remit.

But what I really like about submarines is the characters. It takes a special sort of person to go on a submarine and do what we do and be away from your family for months on end with no contact. No emails, nothing. So I just loved the characters, and the banter, and the imagination these people have and what gets them through that time underwater. Being on submarines was definitely one of the best things I’ve ever done.

Most people, when they think about submarines, think of The Hunt for Red October and that ping noise. Can you hear a ping noise all the time or is that completely made up?

It actually sounds more like a whistle when you hear sonar going. It’s not so much a ping like in the film. Normally when we’re beneath it’s just the relentless sound of machinery and the air-conditioning. If you can imagine air-conditioning on steroids, just constantly blowing. Then we go to emergency stations when something happens.

The first thing they do is crash stop the ventilation. And actually, after you’ve been on a submarine for a while, what you realise is the silence wakes you up. Because there’s so much noise around you that when the ventilation stops, you’re like…That’s not right. They’re quite smelly places too. They’re a very specific environment and it takes a lot of getting used to.

What does the word nuclear mean in terms of the Royal Navy submarines?

That’s a very interesting question and really topical. There’s a lot of debate in Parliament at the moment about whether we should renew the CAS-D, that continuous sea deterrent. Only some of the submarines are actually nuclear armed.

I worked on nuclear submarines, but the submarines I worked on didn’t carry the deterrents. They didn’t carry nuclear bombs. They were propelled by a nuclear power plant. So effectively, if you can imagine, it’s just a big kettle. The nuclear plant makes steam and we use that steam to drive turbines and that gives us electricity and propulsion.

The real beauty of a nuclear submarine is their air-independence. So if you took a diesel submarine, which is the way submarines were for a very long time, they ran off a battery and the battery had to be charged. When you’re charging a battery, you have to run a diesel generator, which means you have to come to the surface.

So, we can circumnavigate the globe dived, whereas a diesel submarine couldn’t do that. That’s the real benefit of nuclear power. Will we still have them in the future? I wouldn’t like to comment. I’d say that’s a decision for Parliament.

You have to stay underwater for a long time so is there a psychological profile done before you go down? What about claustrophobia and other fears? What is the psychology of a submariner?

Being in a submarine has its own stress and pressures but we’re not actually assessed before we go on submarines. And we’re not decompressed when we come back from patrols either. Maybe one of the things on submarines is that there’s very much an attitude of “just get on with it.”

People who don’t like it don’t tend to make it, and you have to like it to go through the process. You have to enjoy it.

Don’t get me wrong, there were times when I’d sit at sea and I’d hate it. You know, I’d say, what am I doing here? But on the whole, I think you have to want to do it and the people who don’t fall apart to the side very quickly.

And did you also have to do scuba-diving or advanced swimming? Or is that just no use in a submarine?

Then you did one from the bottom in a full escape suit to simulate escaping from a nuclear submarine. But they stopped that a few years ago because the risk of the training wasn’t worth the actual possibility that we might have to do it for real.

Portsmouth is very associated with the Navy and is a location in the book. Why is it such an interesting place?

We’ve got a really rich naval culture, predominantly Royal Navy. But if I had to give you a little tour around Portsmouth, I would take you to places like the historic dockyard. The actual Portsmouth Naval Base is the modern dockyard and right next to it we have HMS Victory, Nelson’s Ship. We also have HMS Warrior, which is my favorite ship, because I’m a bit of a geeky engineer.

Warrior was one of the first combined Sail and Steams. It was almost like an arms race between the French and the British back in the early days of the Navy where they were each trying to get steam-powered vessels at sea, and Warrior was one of those.

We’ve also got the Royal Armouries up on the hills, for the gun emplacements during the second world war. The Submarine Museum in Gosport is great too because they’ve spent a lot of money doing Alliance up. She’s the only remaining World War 2 submarine that I’m aware of and you can walk right through her, you can see the bunks and the equipment. And it’s just fantastic.

Portsmouth is a dockyard city, there’s no question about that, but over the years as the dockyards have changed and grown, it’s also gained a vibrant writing and creative arts culture.

The main character in Tenacity is a woman, Danielle, although she calls herself Dan. Why did you write the book from the female perspective?

Dan Lewis started out as a character in a short story competition where the theme was being out of place. I didn’t win the competition and parked her for ages. When I decided that I was going to write about submarines, in a military-set thriller, I thought I would do it with a guy, someone from my own background. Then I found this short story again and I thought that she could be the ultimate outsider.

On a deeper level, I’m quite close to my big sister who’s also in the Navy. And there was a point at which I realized that I had a very different experience in the Navy to my sister. For many years, I didn’t really understand why that was. But over time, I started to realize that it’s because I’m a man, and she’d been treated differently in very similar situations.

Once that dawned on me, it was like a maturing of recognition that I’d had this male privilege and not really known about it. So I wanted to explore how other people look at the Navy.

Some of the treatment verges on misogyny. What do you think the situation is like for those three female submariners that you mentioned?

It’s a crime thriller, right? No one wants to read about a cozy trip on a submarine where everyone was nice!

On a submarine, if you’re a submariner, you’re pretty much alright. If you’re an outsider, you’re an oxygen thief and you get flak. I think those women will be treated the same as the guys, really, but I needed a sense of danger in the book. So I distilled down some of the worst things I could think of and put them in there.

But I did do some research on when women first went to sea in the Navy in the 80s, when they were first allowed as sea-going wrens, as they were called at the time. I thought I might have overdone the misogyny but those women really identified with some of the treatment that happened.

Who are your favorite thriller writers?

I love Peter James and Mark Billingham, Mo Hayder, Val McDermid, James Patterson, Lee Child. That’s what is on my bookshelf and that’s what I like to write.

Where can people find you and TENACITY online?

Tenacity is for sale in the US and UK at all the usual online stores. You can find out more about me and my books on my website. 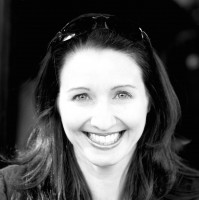 J. F. Penn is a New York Times and USA Today Bestselling Author of thrillers with a supernatural edge. Oxford educated, British born, she has traveled the world in her study of religion and psychology. She brings these obsessions as well as a love for thrillers and an interest in the supernatural to her writing. Her fast-paced ARKANE thrillers weave together historical artifacts, global locations, a kick-ass protagonist and a hint of the supernatural.