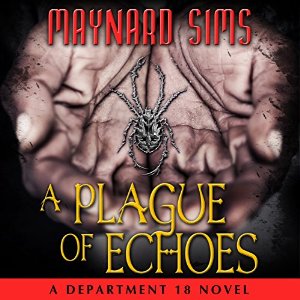 The clock is ticking!

In London, Department 18 Chief Simon Crozier is brutally stabbed and left for dead. Billionaire businessman Pieter Schroeder has laid his first card in a deadly, high-stakes game, a battle that will pit Department 18 against evils both ancient and modern.

As the secret past of Department 18 comes back to haunt the present day, the team’s future – and Crozier’s life – hang in the balance when they confront an enemy who is powerful, malevolent…and perhaps immortal.

A PLAGUE OF ECHOES is available from Amazon UK.

This nail-biting horror/thriller follows the members of Department 18, a secret section of Her Majesty’s Government in Britain. Strangers possessed by a demon are hunting the agents one by one. It’s a race against time as they uncover an intrigue that stretches around the globe and could threaten the world. Sharp writing and crisp dialogue pepper a plot that never takes a breather, yet somehow still gives each character’s subplot time for maximum emotional impact. Mix the best of Ian Fleming and the best of John le Carre, and you’ll get this excellent read by Maynard Sims.

MAYNARD SIMS www.maynard-sims.com Len Maynard & Mick Sims are the authors of sixteen novels with more scheduled, in the genres of supernatural horror, the Department 18 series, crime thrillers and erotic romance. They have written screenplays, and one, based on the first two Department 18 books, won the 2013 British Horror Film Festival Award for Best New Screenplay. Numerous stories and novellas have been published in a variety of anthologies and magazines and Death’s Sweet Echo is their tenth collection. They worked as editors on Darkness Rising, they co-edited and published F20 with The British Fantasy Society, and as editors/publishers they ran Enigmatic Press in the UK, which produced Enigmatic Tales, and its sister titles