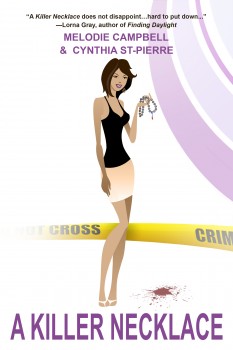 I had just come out of a 15-minute interview with an agent and was feeling a little shaky from the adrenalin. The lobby of the conference floor of the Toronto Marriott Downtown Eaton Centre Hotel was practically empty. Most attendees, fondly dubbed The Usual Suspects, were behind the closed doors of the various conference rooms learning about predators and violent crime from a forensic psychiatrist, or attending other themes sessions.

But in the shadows of an escalator stood one woman. She looked just about as antsy as me, so I walked over and introduced myself.

Melodie had an agent appointment in about ten minutes. Agents aren’t scary. Really.

I wished her friend good luck. We chatted a little more—all about calming our nerves (Agents aren’t scary. Really.)—then arranged to meet at the evening banquet.

As it turns out, after dessert was served that night, Melodie was awarded third prize in the Bony Pete Short Story Contest for “School for Burglars,” a feat which required not luck, but skill. Everyone at the table, including me, was thrilled for her. We eagerly exchanged e-mails. We had to read that winning story!

“School for Burglars” is a fabulous tale, of course. And over the years, Melodie and I exchanged more stories. We offered each other writer support and input. Then we met again at Bloody Words 2008, the year my story “A Terror in Judgement” won second prize. Melodie was sweet when I cried.

Melodie and I were on to something: Not only did we enjoy each other’s company and each other’s writing, we had similar styles. Why not write a mystery novel together?

A Purse to Die For and A KILLER NECKLACE were born!

A lot has happened in the last eight years—Melodie lost a parent; I won a battle with cancer. But the two of us still agentlessly roam the corridors of mystery conferences and continue to support each other in life as in writing.

As Melodie says, “It’s really so simple: we set out to have some fun writing. We set out to surprise each other. I’d write a scene and then Cindy would take over and write the next scene. I wouldn’t necessarily know where she was going with it, so it was always a delight to get the next chapter.”

I say our writing is exactly like an on-going, interactive story. We may shuffle things around during the process or at the end when we’re editing, but that’s the gist of it—back and forth, with plenty of personal emails in between in which we sometimes talk about our story.

There are, of course, our meetings, which usually start at the Orangeville Public Library (halfway between our homes in Oakville and Newmarket) and then continue with an all-important girls’ lunch out.

Much more motivating than writing by oneself.

I admit I wasn’t a fan of group projects in school. Back then it always seemed impossible to reach a meeting of the minds, let alone divide the task evenly between an arbitrary group of students. But Melodie and I became friends before attempting a collaboration. Plus we’re older and wiser now. Ahem.

In fact, Mel and I have lucked out to the point that readers insist they can’t tell where one of us left off writing and the other began. Even my sister, who’s an author herself, says she can’t tell.

Collaboration is team work and everyone knows that on a team, one can’t hog the ball. It’s critically important to make strategic passes…

Over to you now, Mel!

Why write with a partner?

Simply put, it’s FUN! There is someone sharing your lonely writing job every step of the way. Cheering when you surprise her with a twist in a new chapter…

Writing a novel is a lonely pursuit. You spend months by yourself before anyone sees the work you have been slaving over. Having a co-writer takes the loneliness out of being a writer.  Yes, you give up a little autonomy over your plot and characters. But you also share the delight of incorporating new ideas and plot twists that you would never have come up with on your own.

Take it from me: planning murder with a partner is much more fun than doing it yourself.

In marketing Cynthia wrote promotional, packaging and communications materials; penned articles for business periodicals; and a chapter of How to Successfully Do Business in Canada. A member of Crime Writers of Canada, she has one award for fiction and has been a writing contest judge. Best of all for a mystery writer, Cynthia has received a York Regional Police Citizens Awareness Program certificate, presented and signed by Julian Fantino, former Commissioner of the Ontario Provincial Police.

Cynthia’s novels A Purse to Die For and A Killer Necklace, co-written with Melodie Campbell and published by Imajin Books, are available at Amazon, Barnes & Noble and other retailers.