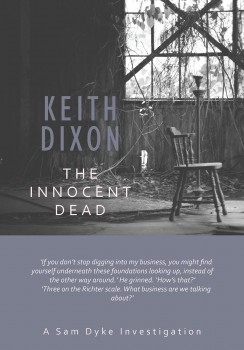 Mark and Bobbie Ware have the perfect life—a huge mansion, enough money to satisfy every conceivable need, and a delightful son of ten years of age.

But this all changes when a man disrupts that life by taking from it the single most important possession the family enjoys: its happiness.

With little hope they call on Private Investigator Sam Dyke to help regain their peace of mind. To do so he must confront and defeat an enemy whose high intelligence and will-power is dedicated to promoting the cause of the most deadly threat facing the world today—international terrorism.

If Sam fails, not only do the Wares lose everything they’ve worked for, but the global battle against terrorism in the Middle East will become almost impossible.

THE INNOCENT DEAD is available from Amazon, Amazon UK and Barnes & Noble.

A few years ago Keith Dixon decided to give up work and write fiction full time.

So since then he’s written seven novels featuring private eye Sam Dyke and published a non-crime book, Actress. He’s also given up work.

The sixth Sam Dyke Investigation, The Secret Sharers, was published in May, 2015.

He’s currently sharing his time between the UK and France.