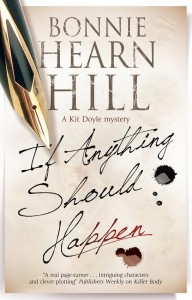 Secrets—their holding, their telling, their discovery—are an important part of crafting an engaging story. Some characters do things only the reader will know. Others learn things after we’ve discerned them, whether good or bad.

With the launch of her latest series, Bonnie Hearn Hill gives her readers a chance to not only meet Kit Doyle, but to watch Kit uncover secrets of her own past. An amateur sleuth who airs other people’s stories on her radio talk show, Kit knows better than most that some secrets are better left hidden. But the bombshell her mother reveals to kick off her story isn’t something she can ignore.

In this interview for The Big Thrill, Bonnie Hearn Hill gives us a look at where her stories come from, and what she thinks of how secrets shape our stories, and our lives.

Secrets and their unveiling are often part of what makes a good read, and you’ve certainly woven them into the plot of IF SOMETHING SHOULD HAPPEN. How important are secrets in your writing?

Secrets are, for me, part of character development, and that is what really interests me–developing a character, learning not only her secrets, but everything I need to know before investing eight months to a living with this fictional person.

Do you always know what the secrets are before you start writing a novel? Or do you learn their true answers along the way?

I try to know everything about my protagonist and her world before I begin writing, but other information, characters, and secrets pop up along the way. By the time I hit page one hundred, I usually learn something I never guessed before then.

What do you make of the secrets held between parents and children?

I grew up in a family full of secrets. If someone had been married before, even widowed, there was no mention of it. If someone were terminal, they were not told, and everyone acted as if life would go on just as it always had. In a way, we are owned by our secrets. What you cannot speak certainly controls you until you ultimately do speak, or you are found out.

In my experience, most secrets are ultimately revealed. In my book, Kit’s mother was a good person who planned to tell her the truth one day. She wanted her to know.

As someone with somewhat of an activist past (or present?), do you see Kit as a series character who can bring issues to light in readers’ minds while they’re just enjoying a good story?

My characters and I have little if anything in common with me, and the stories are theirs, not mine. However, their stories take place in a California I know well. Past books of mine have focused on the older man/younger woman relationship, sex and politics, women and weight/body-image issues, the foster-care system, and in this current book, so-called “gay-conversion” camps. A hearing-impaired friend gave me the idea for my last series character, a reporter who didn’t belong to either the world of the hearing or the world of the deaf. A film based on an early novel of mine set during the Delano Grape Strike of 1965 is currently in pre-production.

With one successful series under your belt, starting a new one must be exhilarating. Is there anything new you want to try out this time around?

I like to take chances and explore new territory. In GOODBYE FOREVER, the second in this series, Kit poses as a runaway and goes underground, where she encounters a group of kids who met when they were in a bizarre study for disturbed children.

What’s next for you, whether in Kit’s world or outside it?

I would like to write a prequel to Kit’s story, and I’m also working on a domestic thriller. I think getting out of my comfort zone is one of the best things I can do for myself as a writer. By traveling, speaking at conferences, colleges, and book fairs, I’m forced to get outside my own head and my own routine. 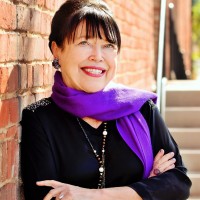 Bonnie Hearn Hill writes issue-driven suspense. A film based on one of her novels is currently in pre-production. GOODBYE FOREVER, the second in the Kit Doyle series will publish in January of 2016. IF ANYTHING SHOULD HAPPEN is her fourteenth novel.