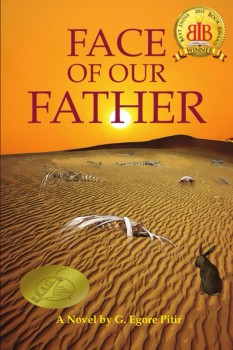 In Face Of Our Father, an international crime thriller, Captain Stu Pierce is an aging former fighter pilot who’s looking forward to retirement. His wife, Angie, a lawyer and women’s advocate, is chasing down a vengeful Middle Eastern criminal who’s escaped justice. When she’s threatened with murder, Stu sets out to protect a wife who refuses to protect herself, and together they become embroiled in a conspiracy of global terrorism with repercussions for world peace and the fate of their marriage. Sometimes the biggest enemy can be the one right next to you…

“Face of Our Father by G. Egore Pitir is an exciting new entry into the burgeoning terrorist thriller genre. There’s a growing list of novels centered around the Middle East, so it’s tough to stand out. Face of Our Father is a unique and compelling addition to the genre, a thriller in which character development is a core part of the story, making it a multi-layered and satisfying read. -SPR Book Review

FACE OF OUR FATHER is available from Amazon.

Wedding the hard-charging American fatalism of a mid-90s Tom Clancy novel with the introspective emotional observations in the face of infrastructural change of Kazuo Ishiguro, FACE OF OUR FATHER is an unusual blend of action-adventure and portrait of domestic intimacy. While Stu and Angie are undoubtedly the white hats, and Zuehb Azwad’s associated cronies the dysfunctional black hats, the basic hero versus villain structure is more rewarding than this pairing would suggest. This is due to Pitir’s powerful narrative thrust, which opens each chapter with a bang and closes it with an anxious rush. Where the Cold War generated spy novels, Pitir may be the most notable pioneer in the post-9/11 genre of “terrorist page-turner.” -IndieReader

“US involvement in the Middle East is a grey area where you just don’t believe one side of the story. Face of Our Father is the one novel that shows both sides…a fast-paced thriller…a mystery so gripping it keeps the reader hooked to the very end…. What makes the character development remarkable is not their perfection, but, rather, their flaws. Highly recommended.”-San Francisco Book Review

…a great thriller with a soul…in the light of current events, the story could have been pulled off the evening news… While readers of Nelson DeMille and, to some extent, Ken Follett, have been spoiled by characters that are deeper than the thickness of the novel in which they are featured, it is unusual to find a new author daring to reach for such heights (or depths) and doing it successfully. -The Columbia Review of Books & Film

G. Egore Pitir grew up near the shores of Lake Michigan, reading too much, writing too little, and ignoring arithmetic altogether. Naturally, he obtained an engineering degree, flew as a fighter pilot, and then got an airline job. Having successfully faced the math demon in college, he decided to conquer the last item on the list and wrote FACE OF OUR FATHER, a novel exploring how today’s clash of cultures reaches into our lives, our marriages, even our beds.