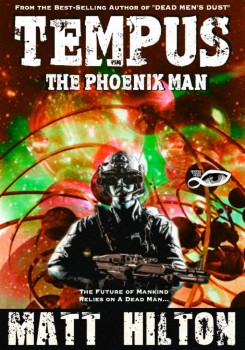 What if everything we thought we understood about the nature of time was wrong?

In the nuclear devastated landscape of London, James Rembrandt delivers law and order with a firm hand and uncompromising resolve. In his violent world it takes a violent man when dealing with cannibalistic scavengers. But Rembrandt was never born to the hellish Old City: he is a man out of time and place, but even he doesn’t know it.

When he is snatched from death, and deposited in an alternate time and dimension, he has finally come home. But he has returned to a place alien to him, and a world suddenly on the verge of destruction when a wormhole tethered between dimensions begins merging both Earths. Our world is about to be consumed, and the future of mankind relies on Rembrandt. He must again transvect, this time to avert the war that destroyed his parallel world, and seal the planet destroying breaches. He has already died once: he could die again. But what is one man’s worth compared to that of billions?

TEMPUS is available from Amazon and Amazon UK.

High-concept, speculative fiction all delivered in a rip-roaring action adventure, from the best-selling author of the Joe Hunter thrillers.

Matt Hilton quit his career as a police officer to pursue his love of writing tight, cinematic action thrillers. He is the author of the high-octane Joe Hunter thriller series, including his most recent novel ‘The Devil’s Anvil’ – Joe Hunter 10 – published in June 2015 by Hodder and Stoughton. His first book, ‘Dead Men’s Dust’, was shortlisted for the International Thriller Writers’ Debut Book of 2009 Award, and was a Sunday Times bestseller, also being named as a ‘thriller of the year 2009’ by The Daily Telegraph. Dead Men’s Dust was also a top ten Kindle bestseller in 2013. The Joe Hunter series is widely published by Hodder and Stoughton in UK territories, and by William Morrow and Company and Down and Out Books in the USA, and have been translated into German, Italian, Romanian and Bulgarian. As well as the Joe Hunter series, Matt has been published in a number of anthologies and collections, and has published novels in the supernatural/horror genre, namely ‘Preternatural’, ‘Dominion’, ‘Darkest Hour’ and ‘The Shadows Call’. Also, he has a brand new thriller series featuring Tess Grey and Nicolas “Po’boy” Villere debuting in November 2015, with ‘Blood Tracks’ from Severn House Publishers. He is currently working on the next Joe Hunter novel, as well as a stand-alone thriller novel.
www.matthiltonbooks.com
@MHiltonauthor
www.facebook/MattHiltonAuthor