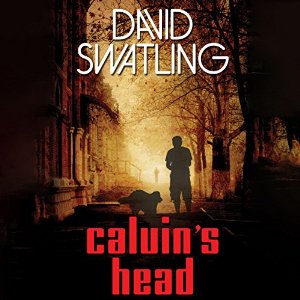 Life in Amsterdam isn’t all windmills and tulips when you’re homeless. Jason Dekker lives in a jeep with his dog, Calvin, on the outskirts of the city. A thesis on Van Gogh brought him to the Netherlands, and the love of Dutch artist Willy Hart convinced him to stay. But Willy is gone, and Dekker is on the brink of a total meltdown. On a summer morning in the park, Calvin sniffs out the victim of a grisly murder. Dekker sees the opportunity for a risky strategy that might solve their problems. Unfortunately it puts them directly in the sights of the calculating stone-cold killer, Gadget. Their paths are destined to collide, but nothing goes according to plan when they end up together in an attic sex dungeon. Identities shift, and events careen out of control, much to the bewilderment of one ever-watchful canine. Oscar Wilde wrote that each man kills the thing he loves. He didn’t mean it literally. Or did he?

CALVIN’S HEAD is available from Audible.

David Swatling grew up in New York, studied theatre, and moved to Amsterdam in 1985. For twenty-five years he produced arts & culture documentaries for Radio Netherlands, winning numerous international awards. His debut psychological thriller Calvin’s Head was a 2015 Lambda Literary Award Finalist, and his next thriller Corpus Calvin is due out in May 2016