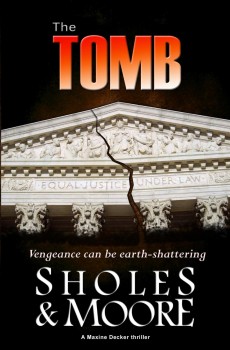 Retired OSI special agent Maxine Decker returns in THE TOMB, her most dangerous mission to date: prevent the assassination of a Supreme Court justice. After capturing the world’s most wanted drug lord, Maxine comes across a photo of an object recently found in the Colorado River, an object tied to a WWII plot to send a submarine up the Colorado and destroy the Hoover Dam. Identifying the object as an earthquake machine based on the turn-of-the-century design of Nikola Tesla, Max soon becomes the target of two groups: the designer of a modern version of the device and the Mexican cartel bent on revenge for the killing of their leader. Her mission becomes critical when she discovers that the lives of all nine justices, and perhaps millions of others, are at risk.

THE TOMB is available from Amazon.

Lynn Sholes & Joe Moore are the #1 Amazon and international bestselling authors of THE GRAIL CONSPIRACY and THE PHOENIX APOSTLES.