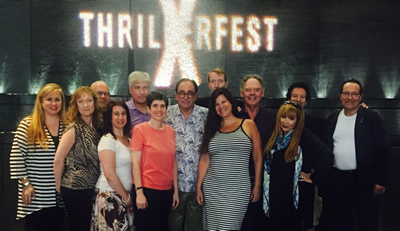 The mood at the Hyatt was exhilarating and energizing this year—what better testament to ten years of dynamic success at Thrillerfest? We’ve grown from a small event in Arizona to a widely respected international conference for writers, industry professionals, and enthusiasts of the thriller genre.

As co-founder Gayle Lynds shares: “ITW was based on a dream.  Author organizations come and go, and there were no guarantees ITW would not only survive but thrive.  What a thrill (truly) to see so many happy people hurrying down the halls of ThrillerFest and sitting in audiences and talking animatedly on panels.  I particularly loved Daniel Palmer’s song at the banquet, which seemed to encapsulate the extraordinary experience of young ITW and ten ThrillerFests, from that first small gathering in Scottsdale to the rich feast of New York.  Bravo, Daniel.  And Bravo ITW and ThrillerFest!  And BTW, one of my most proud inventions was the name ThrillerFest.  To see it in tall letters everywhere was a high I’ll never forget.”

Between the FBI workshop, CraftFest, Master CraftFest, PitchFest, and ThrillerFest, and that memorable banquet, we had six incredible days of education and celebration, with people making vital new connections and catching up with cherished friends. I keep hearing people say that Thrillerfest is like summer camp for writers. It’s heartwarming to see a core of authors return, year after year, to have that kind of experience.

Last year, we added Master CraftFest, and it was such a hit that we decided to do it again this year. It’s a one-day hands-on workshop for writers of all levels, an intense but extremely eye-opening day for our authors. Each class is limited to 10 students. What an incredible opportunity for a writer to take it to the next level. As for Craftfest itself, more than 400 students gathered to learn from the best teachers in the business. Several authors who participated in Craftfest in years past, developed their manuscripts, and then found agents and sold their books. It’s so deeply rewarding to see that cycle. And guess what? CraftFest and Master CraftFest are not just for aspiring novelists. Anybody can jump in at any stage and up their game.

Craftfest Director D.P. Lyle says, “CraftFest 2015 was another great success with a cadre of teachers that were stellar, many of whom were new CF instructors–Charlaine Harris, Tom Robb Smith, and Greg Iles, to name a few. Likewise, Master CraftFest, our one-day writing intensive, continued to grow and improve. We had 70 students and a waiting list so next year we are expanding Master CF to a maximum of 100 students. We also welcomed three new Master CF instructors: Gayle Lynds, Heather Graham, and David Corbett. Each, along with other wonderful teachers, will return for Master CF 2016.” 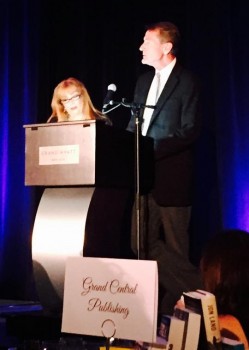 Thrillerfest is about building relationships and one of our most rewarding ones is with the FBI. They like us—they really, really like us—because they know we want to get it right in our books. Our off-site seminar “Today’s FBI: Crime Essentials for Writers” filled quickly and gave lucky participants a chance to learn about cybercrime, criminal investigations, and international terrorism—at the FBI NYC headquarters, no less.

Betsy Glick from the FBI’s office of public affairs shares, “I’m delighted 100 writers came to Manhattan ahead of Thrillerfest to spend the day listening to FBI agents’ personal stories of their tireless efforts to catch all manner of criminals around the world. Since the FBI workshop is so small compared to Thrillerfest, I was glad my colleagues and I were able to spend time at the conference meeting with–and providing guidance to–hundreds more writers.  It was a treat to meet Thrillerfest attendees and help them shape their thrillers around real-world scenarios and people rather than the Hollywood version. But we’re working on that, too!”

Every year, PitchFest gives aspiring authors an incredible opportunity to pitch to over 50 agents. In making our decision to hold the ITW conference in New York City every year, we take full advantage of being in the publishing capital of America. We are able to recruit some top-drawer agents to the Hyatt to hear writers’ pitches. Huge thanks to the fabulous PitchFest team, including Sandra Brannan and Terry Rodgers, who work tirelessly to make this event work so well. I’ve heard from many it’s a major destination for writers. 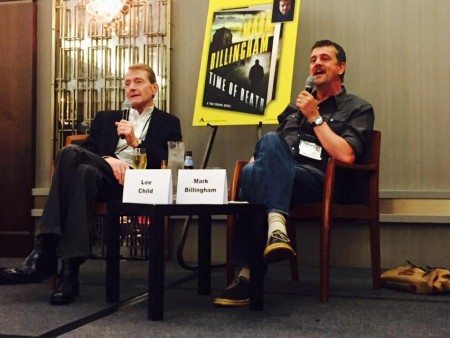 We are so fortunate to have many of the most talented writers in suspense fiction at Thrillerfest, accepting awards, speaking on panels, teaching, and, best of all, investing in helping other writers at all stages of their careers. The bar in the lobby of the Hyatt has been the scene of many historic chats.

Many of the spotlight interviews onstage were laugh-out-loud funny and take-away smart. Jon Land did a phenomenal job interviewing Kathy Reichs. When Karin Slaughter interviewed Charlaine Harris, it turned into two Southern women chatting about how no matter what happens—even if it’s a vampire-obsessed fan pleading for a hug—they have no choice but to stay well mannered. It’s a Southern thing. Then it was the British men’s turn, when Lee Child and Mark Billingham felt so comfortable telling it like it is that a cocktail ended up in each hand. Rumor has it they got the idea from the Dan Conaway interview of Greg Iles during their time onstage. 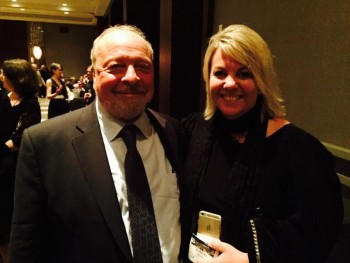 ITW co-founder David Morrell interviewed Nelson DeMille in a standing-room-only ballroom and had this to say: “Nelson and I have been at this for so long that we remember when the author tour—invented in the late 1980s—was new. We used to compare notes about how to pack clothes to travel to seven cities in as many days. We crossed paths often over the years, but my on-stage interview with him at ThrillerFest was the first time that we’ve been able to discuss anything at length, with hundreds and hundreds of people listening. It was an honor and a joy to talk candidly and yet publicly with this great author about his amazing work.”

The author panels offered every kind of expertise, from writing about science (chaired by F. Paul Wilson) to writing about sex (chaired by Christopher Rice). It’s almost impossible to call out individual panels with so many great ones to choose from, but I was especially impressed with the panel on how agencies handle jurisdictional divides (chaired by Jon Land) and with a panel on writing a book in a team (chaired by W. Michael Gear). Co-writing partnerships are a growing trend in suspense fiction, and we’re proud at ITW that we are always on the cutting edge. 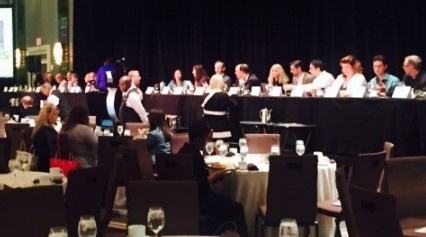 One of ITW’s most important services is working with debut authors. We provide mentoring and networking opportunities for people coming out with their first books, and each Saturday morning there’s a special breakfast just for them. Almost 30 debuts sat at the long table onstage this year, taking turns to stand and tell the assembled breakfast crowd about themselves and their novels. Steve Berry thoughtfully introduced each of them, and then gave an insightful talk about “secondbookitis,” as writing that second book can be daunting.

ITW debut author chair Jenny Milchman shares, “I’ve had the chance to usher along three debut classes as they prepare minute-long intros to their books…and be up there one special time myself. Standing before a crowd of hundreds, debuts get to see just how hungry thriller writers are to meet new authors. For many of them, this is the first opportunity they’ve had to introduce their book to the world. And what a big world it is at ThrillerFest!”

Dress-up time comes on Saturday night when we gather at the cocktail party, the foyer so packed you can hardly hear yourself speak, with many authors being interviewed on-camera or photographed in front of our Academy-award-styled step-and-repeat background. 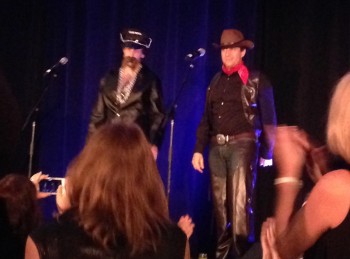 The banquet itself is always a memorable event, from the delicious dinner to the giveaway books, and the speeches and shout-outs and awards presentations, with plenty of moments for heartfelt thanks. This is the time for one of the highlights of the entire conference: Daniel Palmer’s musical performance. For years we loved the guitar duo of Daniel and his father Michael, singing about the reality of writing thrillers. After we lost Michael in 2013, Daniel gave a solo performance that left few dry eyes in the room. This year, he took it in a new direction, jumping on the stage with Brad Parks, both of them wearing Village People-esque leather and chains, to sing about writing to the tune of “Y.M.C.A.” Unforgettable.

After the award winners accepted their hard-won trophies and Nelson DeMille gave his thoughtful acceptance speech, it was time for the after-party where authors, fans, industry professionals all mingle until the wee hours.

Best of all: Next year, we’re going to make the conference even more memorable, I promise you. Join us at the Hyatt on July 5th to 9th, with Heather Graham as the 2016 Thrillermaster.

–The Big Thrill Editor Nancy Bilyeau contributed to this report.