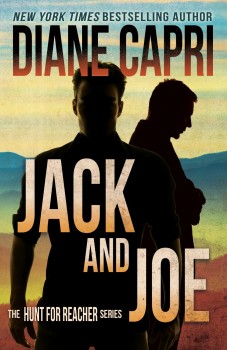 FBI Agents Otto and Gaspar pick up where Lee Child’s “The Enemy” leaves off in the Hunt for Jack Reacher.

When FBI Special Agents Kim Otto and Carlos Gaspar are sent to Fort Bird, North Carolina to find Jack Reacher, powerful enemies with their backs against the wall will stop at nothing to keep the secrets Reacher left behind.

“Full of thrills and tension, but smart and human, too. Kim Otto is a great, great character — I love her.” Lee Child, #1 World Wide Bestselling Author of Jack Reacher Thrillers

JACK AND JOE is available from Amazon, Barnes & Noble and iTunes.

“Diane writes like the maestro of the jigsaw puzzle. Sit back in your favorite easy chair, pour a glass of crisp white wine, and enter her devilishly clever world.” —David Hagberg, New York Times Bestselling Author of Kirk McGarvey Thrillers

Bestselling author Diane Capri is a recovering lawyer. She’s a snowbird who divides her time between Florida and Michigan. An active member of Mystery Writers of America, Author’s Guild, International Thriller Writers, Novelists Inc., and Sisters in Crime, she loves to hear from readers and is hard at work on her next novel.