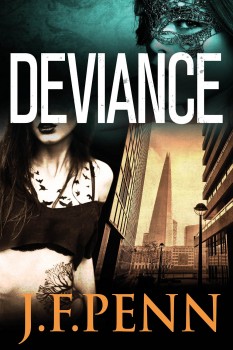 LONDON. When the body of a priest is found in the ruins of Winchester Palace, his tattooed arms flayed, his mouth stuffed with feathers, the artists and outcasts of Southwark huddle in fear.

Private investigator Jamie Brooke begins the hunt for the murderer aided by Blake Daniel, a psychic researcher, who is haunted by visions of the past. As violence erupts, leaving a trail of bodies in its wake, Jamie and Blake must find the skin collector before those they love are taken down.

A crime thriller with an edge of the supernatural, Deviance is the story of a struggle for power and a fight for freedom against the backdrop of modern-day London.

DEVIANCE is available from Amazon, iTunes and Kobo.

J.F.Penn is the New York Times and USA Today bestselling author of the ARKANE thrillers and London Psychic series. Her books weave together ancient artefacts, relics of power, international locations and adventure at the edges of faith. Joanna lives in London and enjoys a nice G&T.