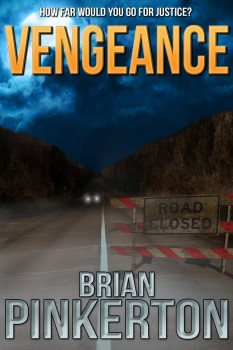 After the killer of his fiancée is acquitted, a school teacher joins “The Circle,” a secret group of citizens united to eliminate their enemies. But he discovers too late that there is a catch…

“VENGEANCE is a thriller with bite that will turn its own pages… Pinkerton plays all the right notes.” — Crimespree Magazine

“Pinkerton has written a winner… a neatly packaged, taut-as-a-bowstring thriller… that fans of Harlan Coben and John Grisham should swallow whole.” — Horror World

VENGEANCE is available from Amazon and Barnes & Noble.

Brian Pinkerton is an American author of fiction in the thriller, mystery and horror genres. His novels include Abducted, Vengeance, Anatomy of Evil, Killer’s Diary, Bender, Rough Cut and How I Started the Apocalypse. Select titles have also been released as audio books and in foreign languages.