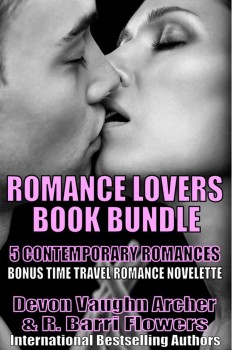 Destined to Meet by Devon Vaughn Archer
In Lake Barri, Colorado, bestselling children’s book author Courtney Hudson didn’t date, didn’t go barhopping and definitely didn’t do one-night stands. But when she decided to let loose for one night, who would have guessed the beautiful young widow would end up in the bed of a sexy, good looking hunk from Alaska? Police detective Lloyd Vance had moved to escape a troubled past. And after a sizzling night of passion with Courtney, he knew he had made the right move. But then tragedy strikes, and Lloyd and Courtney get swept up in a twist of fate that threatens to destroy their burgeoning affair and all the wonderful possibilities it presents.

Forever Sweethearts by R. Barri Flowers
In the time honored tradition of such novels as Bridges of Madison County and The Notebook comes a nostalgic, poignant tale of college sweethearts, young love gone awry, second chances, and new beginnings. Taylor Holland and Vaughn Mitchell, former lovers at Michigan State University, reunite after 25 years on a reality TV show and rekindle their romance. Is love better the second time around? Or is there too much water under the bridge to find the magic again?

Kissing the Man Next Door by Devon Vaughn Archer
Hairstylist Mackenzie Reese is feeling fabulous and free! Her teenage son has gone cross-country to live with her ex, so Mackenzie’s got a new lease on life. Then sexy disc jockey Ian Kelly moves in next door, stirring desires. Ian moved to Vermont for a job and independence. When he finally crosses the path of his beautiful, sassy neighbor, things heat up quickly. But unexpected drama threatens to rain on this block party. The romance that exudes between the hot neighbors can overcome any obstacles. Or can it?

Love at the Sea Bluffs Lodge by Devon Vaughn Archer
When Connie Sheridan, the attractive owner of the Sea Bluffs Lodge in Sea Bluffs, Oregon, wins a dinner with handsome romantic suspense writer Mitch Templeton at a celebrity auction to promote literacy, sparks fly. But having been hurt by men in the past, Connie remains wary of love and romance. Mitch had not counted on meeting Connie, who immediately captivated him like no woman had before. Their all-consuming passion holds the promise of much more, were it not for trust issues that stand between them. Now both Connie and Mitch must reconcile the past to have a chance for a future with each other and all it entails.

To Find That Love Again by Devon Vaughn Archer
After losing his wife and daughter in a car accident, writer-photographer Richard Lowry loses his will to do what he does best, becoming a recluse at his house on the famed 17-Mile Drive on California’s Monterey Peninsula. Single mother Janine Henderson, an editor at Richard’s New York City publisher, is assigned the task of bringing him back into the fold, with two books left in his contract. The two begin to connect beyond their professional association and personal misfortunes as they seek to find true love again. Or will a secret exposed stop their romance in its tracks?

Billy the Kid’s Wife: Bonus Time Travel Romance by R. Barri Flowers
When a modern day historical romance writer rents a cabin in Sky Creek, Colorado to complete her next novel, a strange dog shows up, along with a handsome man and young boy. She soon comes to realize that the man is the onetime outlaw known as Billy the Kid, and that the corridors of time have merged, offering her two very different lives. She has an important decision to make in following her destiny.

“Well-written book with tantalizing tale of romance…. The storylines, characterizations and plots were on point. Each page flowed from chapter to chapter without missing a beat. Highly recommended.” — Pamela Bolden, book reviewer on Love at the Sea Bluffs Lodge

“A good story of contrasts that shows how powerful the mind can be.” – Romantic Times on To Find That Love Again

“This is a warm and moving story about losing love and being afraid to find it again.” – Brenda Mott, bestselling romance author on To Find That Love Again

“Reads like an easy conversation that flows so well, you’ll want to know what going to happen next. — Urban Reviews on Destined to Meet

“A good romance novel…. Enjoyable read and I would read other books from this author in the future.– OOSA Online Book Club on Destined to Meet

“A fascinating contemporary romance…. fans will appreciate the romance between the Alaskan and the Lower Forty-eight widow.– Harriet Klausner, book reviewer on Destined to Meet

“A great book from the beginning of the first page to the very end.” – Amazon reviewer on Destined to Meet

“An excellent read by Devon Vaughn Archer. The relationship between the main characters is very realistic and relatable. The characters are also very well developed which helps to make the overall story more enjoyable.” — Urban Reviews on Kissing the Man Next Door

“Enjoyed this read. It was quick and the story has a smooth flow….Recommend to any lover of romance.” – OOSA Online Book Club on Kissing the Man Next Door

“The book was well put together…. Archer did a fine job of telling the tale of a single mother struggling to be everything to everyone.” — BRAB Online Book Club on Kissing the Man Next Door

“A good romance…highly recommend.” – Amazon reader on Love Aboard the Titanic

“A masterful thriller set in the dark underbelly of Maui, with the vivid details of police procedure one would expect from an author who is also a top criminologist. A terrific read!” — Douglas Preston, New York Times bestselling author on Murder in Maui

“R. Barri Flowers writes with the passion and knowledge of someone who truly knows his craft.” — Allison Leotta, bestselling author

“Vividly written, this book holds the reader’s attention and speeds along.” — Romantic Times on Justice Served