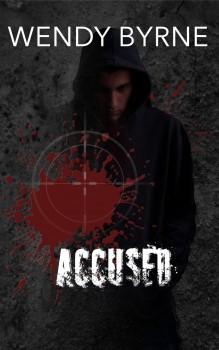 Spawned from the depths of every parent’s worst nightmare, Jillian Beckett’s 16 year old troubled son is charged with murder. He’s unable to remember what happened and swears he’s off drugs, but should she believe him? Her ex-husband doesn’t. The high-priced lawyer she hired doesn’t. Where does motherly instinct intersect with reality?

Afraid and alone, she reluctantly enlists the help of her son’s football coach to find the truth of what happened. As they battle to uncover the guilty party, confidences are shattered, lives are on the line, while her son is one step closer to spending his life behind bars.

ACCUSED is available from Amazon.

“Man, I loved this book. I quickly became enmeshed in the lives of the characters: Jill, Travis, Sam, & Cole. The story has a great beginning that grabs you by the throat, choking off your breath, keeping you reading and searching for a source of air. Before I’d completed the first quarter, I’d cried, felt hopeless, hyperventilated, & then gotten angry, truly spitting mad. I’d discovered a jewel. I couldn’t stop reading if I were paid! Wendy Byrne developed some really despicable, obnoxious characters. I’d like to knock Archie’s block off and either lock up or drug all the deceitful, smarmy Juvenile Court officials, counselors, and therapists, including the shyster Reggie Saunders and the slimy Dr. Stern. The setting took me back to my time in both the Juvenile Court system & inpatient adolescent treatment facilities. I had some frustrating social work experiences with the foster care and delinquency system. I believe some of my poor former clients and their families got assigned very similar inept, corrupt, or just intrinsically bad guys on their cases. Travis, Lexie, Jeremy, and Carlos must be doomed for failure in this rigged system.

Although I wasn’t angry by the book’s midpoint, I was sad, filled with despair. I’d identified with Jill, becoming mired in the systemic muck that passed for Juvenile Justice. I hoped the author would toss a life-saver, offer a hint of a rainbow. I felt compelled to support Jill in controlling her panic attacks and dependency issues. I joined Mama Iris in teaching Jill who to trust a little more (she needed our help). As Jill became stronger, more independent, I glimpsed the rainbow momentarily before the Juvenile Justice system again buried Travis and his supporters in gloom. Every twist of fate or devious scheme robbed me of my happily-ever-after dreams, swallowing the wishes I had for Travis, Jill, and Sam. There was still a spark of hope left that the good guys could unravel this quagmire before the hearing or the fate orchestrated by the unknown mastermind. You’re kept guessing until the final clue drops, and the ending may surprise you. This book was thoroughly entertaining and left me wanting more. This setting provides another venue for Wendy Byrne to paint new scenarios with a whole new cast of characters. If she writes it, we will read it, we’ll follow her recounting the lives of those trapped in the system, waiting to be lead toward the light.” K’Tee (librarian)

Wendy lives in the Chicago area. She has a Masters in Social Work and worked in the child welfare field for twelve years before she decided to pursue her dream of writing.

Between teaching college classes, trying to get her morbidly obese cat to slim down and tempering the will of her five-year-old granddaughter, who’s determined to become a witch when she turns six so she can fly on her broom to see the Eiffel Tower and put hexes on people–not necessarily in that order–somehow Wendy still manages to fit in writing. She spends the remainder of her days inflicting mayhem on her hero and heroine until they beg for mercy.