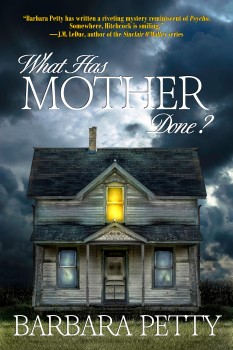 In a small Midwestern town, on a cold March day, a man plunges to his death off a high, rocky cliff, setting in motion a string of events that will rip open the long-hidden secrets of the town’s most prominent family—secrets that haunt amateur sleuth Thea Browne and will change her entire worldview.

WHAT HAS MOTHER DONE is the first in a new mystery series by bestselling author Barbara Petty, and perhaps, the most challenging story for this veteran of three previous standalone thrillers.

“I have wanted to write a mystery series for a long time,” she says. “But I knew I would have to create a protagonist that I could live with. Not an easy challenge.”

Petty knew she wanted a female lead with a compelling career, but was quick to dismiss “professional detective” for something more familiar. Leaning on her background in the newspaper industry, Petty made Thea an investigative journalist, naturally transitioning her into a somewhat reluctant amateur sleuth after her mother is accused of a murder she didn’t commit.

“My protagonist’s reporter’s scepticism and loyalty to her family propel her to carry out the investigation the local police have dropped,” she says.

Petty describes Thea as a kaleidoscope, encompassing aspects of friends, family, and even Petty herself. “She starts as an unwilling champion for her mother, but ends up as her fiercest warrior,” she adds.

Once the protagonist details began to gel, Petty set to work on creating the landscape. Although the setting was loosely based on her hometown of Rockford, Illinois, some changes were inevitable, beginning with the addition of a make- believe fifty-foot cliff.

“Rockford doesn’t have one, so I changed the name of the town to Rockridge, and the ‘ridge’ became the cliff I needed,” she says. “My husband told me that ‘Rockridge’ was the name of the town in Blazing Saddles. So, as an inside joke, that tiny homage to one of my favorite movies seemed fitting.”

As Thea moves through the book, she begins a journey of self-discovery—the entirety of which will be told through (ideally) several volumes of the series. Having read interviews with some of her favorite mystery writers, Petty understands the key to a long-running series rests on the author’s ability to keep the characters and plotlines fresh. It’s a challenge she’s been working on since she started dreaming about writing mystery and suspense as a youth.

Despite spending an extended time in Paris, considered a city of love, romance wasn’t a genre she’d consider. Besides, she’d already cut her teeth on mystery classics like the Bobbsey Twins and of course, Nancy Drew, and had, in fact, grown up with mysteries her entire life.

“I know that as a child it delighted me when Nancy or the twins solved a mystery that had stumped the grownups. So at first the appeal for me was the detective’s resourcefulness to crack a brain-stumping puzzle,“ she says. “But the more mysteries I read, the more I grew to love and appreciate not just the detective’s ingenuity, but his or her (and I liked the fact that there were more and more women detectives) ability to crack open the puzzle of the human heart. Some of my favorites were the women trailblazers: Sue Grafton, Marcia Muller, and Sara Paretsky.”

These trailblazers continue to inspire Petty as she navigates the ever-changing publishing world filled with opportunity, but also challenge. She admits she’s slow to join the expansive social media bandwagon, preferring to largely avoid the time-drain of Facebook and Twitter in exchange for hours spent working on her craft.

Though not as disciplined as she’d like to be, Petty self-regiments in short time bursts, taking breaks to read and feed the curiosity that often defines a writer. On her desk she keeps only her computer, a bottle of water or cup of tea, and a number of treats for her dog to deter too many disturbances.

“I used to have a mirror that hung on the wall over my desk,” she says. “Not for vanity, but for making expressions and then describing what I saw on my own face. Fortunately, I don’t need that anymore.” 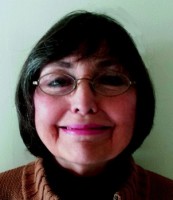 Barbara Petty was born and educated in the Midwest. After a sojourn in Paris during college, she went bi-coastal, starting in New York and then moving on to Los Angeles. She has been a newspaper reporter, a magazine editor and written animation scripts for TV shows such as Transformers, G.I. Joe and My Little Pony. She’s also worked in the film industry, both on staff and behind the camera. What Has Mother Done? is her fourth published novel, and the first of the Thea Browne mystery series.