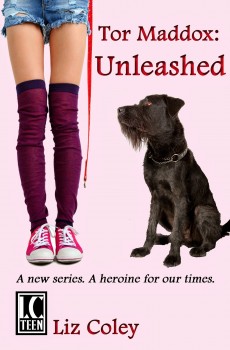 When sixteen-year old Torrance Olivia Maddox, self-confessed news junkie, figures out that the mysterious and deadly New Flu is being spread by dogs, she has one question—if the danger is that obvious to her, why hasn’t the government revealed the truth and taken action?

Her search for the answer will take her farther than she ever imagined. But then again, she never imagined that man’s best friend could become public enemy number one, that men in black might show up in her cozy suburban neighborhood, that she’d spend her sixteenth birthday as a teenaged runaway, and that her effort to save one dog would become a mission to save them all.

*****Fast paced, and hard to put down. Liz Coley’s novel is a fun and intelligent story that tugs you along the sidewalks to the nearby dog park and beyond. . Tor is a smart and talented heroine caught not only in the midst of teenage angst but that which threatens not only mankind’s best friend, but mankind itself. Loose yourself in book that not only promises, but delivers. An exciting start of a smart new series.

*****Liz Coley has unleashed a refreshing view of a powerfully brave teenager, Torrance Maddox. She is strong enough in her beliefs to do something about a life-threatening situation. I was cheering for her as she took the necessary steps to protect her dog, Cocoa, from the drastic regulations the government was enacting. While her parents and others followed orders without question, Torrance defied them, ran away and was chased by the Men in Black. She does bend some rules, but in this process she learns about family support and true friendship.

*****It really is refreshing to see a teenage girl who isn’t a clueless ditz just trying to get the boy of her dreams to notice her and Liz Coley pulls off an intelligent, persevering 15-yr old that you can’t help but love.

*****Tor has a delightful, quirky, and unique voice. I laughed out loud so many times! Tor is fun, likable, and she changes so much over the course of the story. The development for all main characters throughout the book is really well-done, as are the individual voices of those like Tor’s brother, her parents, and the government agents she has to deal with.

Liz Coley has been writing long and short fiction for teens and adults for more than ten years. Her short fiction has appeared in Cosmos Magazine and several speculative fiction anthologies: The Last Man, More Scary Kisses, Strange Worlds, Flights of Fiction, You’re not Alone, and Winter’s Regret.

In 2013, psychological thriller Pretty Girl-13 was released by HarperCollins in the US and UK. Foreign translations have been published in French, Spanish, German, Portuguese, Swedish, Norwegian, Russian, Czech, Slovakian, and Chinese (simplified and traditional).

Her independent publications include alternate history/time travel/romance Out of Xibalba and teen thrillers in the new Tor Maddox series.

Liz lives in Ohio, where she is surrounded by a fantastic community of writers, beaten regularly by better tennis players, uplifted by her choir, supported by her husband, teased by her teenaged daughter, cheered from afar by her two older sons, and adorned with hair by her cats Tiger, Pippin, and Merry.