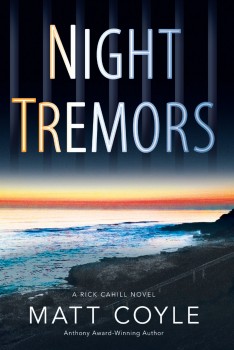 The follow-up promises as much if not more: Nightmares of the man he killed two years ago still chase Rick Cahill through his sleep. Memories of his murdered wife haunt him during waking hours. When an old nemesis asks for his help to free a man from prison wrongly convicted of murder, Rick grabs at the chance to turn his life around. His quest fractures his friendship with his mentor, endangers his steady job, and draws the ire of the Police Chief who had tried to put Rick behind bars forever. With the police on one side of the law and a vicious biker gang on the other—all trying to stop him from freeing the man in prison—Rick risks his life to uncover the truth that only the real killer knows. What really happened one bloody night eight years earlier?

Coyle took a few minutes out to chat with The Big Thrill.

Who is Rick Cahill?

Rick is a disgraced ex-cop who many years after his wife’s murder is still the main suspect. At the beginning of NIGHT TREMORS he’s working the adultery detail, taking photos of people doing what they shouldn’t, for a successful La Jolla private investigative agency. He’s made decisions and taken actions in his life that have had horrible consequences. Yet, he still lives by the code handed down to him by his late father: Sometimes you have to do what’s right even when the law says it’s wrong.

Were you surprised by the accolades for your first novel to feature Cahill, Yesterday’s Echo?  Why do you think it resonated with so many readers?

I was happy, surprised, and honored about the success of Yesterday’s Echo. It took years of revision to get it in good enough shape to interest an agent and finally be published. I felt good about the book when I finished it in that I’d told the story I wanted to tell in the way I wanted to tell it.

After that, I just hoped that readers would like it. I think Yesterday’s Echo gained an audience because readers like Rick Cahill even though he’s very flawed. He’s not a superman and, at times, makes incorrect assumptions that lead to disastrous results. But he has a good heart and tries to do the right thing no matter how much pain the quest causes him. He’s dogged to a fault. I think readers appreciate that about him. Maybe they see some of themselves in Rick because he doesn’t have special abilities to fall back on when he gets into trouble. He has to stumble around in the dark and try to figure things out and when he gets hit, it hurts.

Did you envision writing a series when you started Yesterday’s Echo?

I did, but in the beginning I wasn’t sure I had a character that could fill out a series. When finally I came up with the sentence that opens Yesterday’s Echo (The first time I saw her, she made me remember and she made me forget.), I knew I had a character that had a back-story that needed to be examined and an unfulfilled quest for redemption that would carry him though many books. A couple ideas for standalones are percolating, but I hope to write Rick for many years to come.

What sparked the idea for your new Cahill novel, NIGHT TREMORS?

I watch a lot of true crime on TV and a story about a teenager in prison for murdering his family has always stuck with me. Two different networks followed his story over the years until he was finally exonerated and freed from prison. The idea of someone unjustly imprisoned resonates with Rick because he knows what it’s like to be falsely accused of a horrible crime.

How much of your writing has been influenced by your life?

There are some scenes in both books that are autobiographical, but blown way up. The vast majority of the stories are straight out of my head. My life hasn’t been that exciting. However, every writer has to dig down into his or her own emotions and convey them through their characters to make the characters seem real. I hope I’ve been able to do that.

What compelled you to finally write that “great American novel?”

Ha! I see you’ve read my bio. One of the things that finally compelled me to write a novel was to stop trying to write the “great American novel.” I’ve read crime since I was a young teen. It’s in my blood. When I think about a story, I think about a crime as the catalyst. When I try to reveal character, I center people’s lives around a crime and show how they are forced to deal with its ramifications.

But what really made me finally write a novel was an ultimatum I gave myself about thirteen years ago when the fourth golf company I’d worked for in ten years went out of business. I either had to write a novel or shut up about wanting to be a writer. I guess I didn’t want to stop talking.

Are your novels mysteries or thrillers?  What constitutes the difference in your mind?

My publisher calls my books thrillers. My agent calls them literary mysteries. I think of them as hard-boiled suspense with noirish undertones. I’d prefer to just call them crime novels. Sometimes we get too caught up in labels, but I do understand that a book has to be put somewhere on the shelf. However, readers read a multitude of genres and sub-genres. Robert Crais is one of the best mystery writers you’ll ever read. As we all know, he writes the Elvis Cole, Joe Pike crime novels. A PI with a bad-ass sidekick. Hard-boiled mysteries, right? Well, they’re more nuanced than that. And, in Hostage, he wrote a tour-force-thriller. All wannabe thriller writers should read Hostage like screenwriters read Chinatown. Or was Hostage really suspense because of the hero’s journey? I don’t care. All I know is that when the next Crais, Parker, or Connelly novel comes out, I drop what I’m reading and go buy it.

How do you balance the writing life with a day job and family?

I’m lucky in that I work from home and start early in the morning. After the day job is over, I take my dog for a long walk and decompress. Then I go back into the same office and write, but I use a different computer, a different desk, and stare at a different wall. I even sit in a different chair. Getting everything done takes discipline, which isn’t my strong suit, but I don’t really have a choice.

What’s next?  Another Cahill or perhaps a standalone?

I’m writing the, as of yet unnamed, third Rick Cahill (thriller, mystery, hard-boiled, suspense, cozy) crime novel right now. As I mentioned before, I do have an idea for a standalone, which would be very different from Rick and very dark. Not sure I’m ready to mine the depths required to write that book just yet. 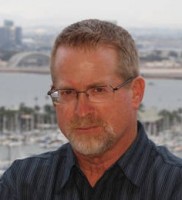