For our international readers, in a rare departure from our usual format, we shine a spotlight on this well-known German author. A companion piece on Austrian-based author Ines Eberl can also be found in this issue. —The Editors

In the first volume of Kathrin Lange’s popular Faris Iskander series, her protagonist suffers from intense self-hate. After losing almost seventy people in a hostage situation gone very bad, Iskander is crippled by guilt, despite his partner reminding him he wasn’t the one to pull the trigger—the kidnapper was. Still, Iskander lives with the underlying fear that one of his enemies will return.

Of course, this is exactly what happens in GOTTESLUGE.

Iskander is called in to a kidnapping taking place in one of Berlin’s most popular churches. Before a young muslim boy known to Iskander blows himself up with a suicide bomb, he relays two chilling messages: They lie when they say God is great. And, Next time you will be pulling the trigger.

The events propel Iskander into a deep darkness—which for a character that is already badly wounded, makes for a thrilling and emotional ride.

“Faris is Muslim and he is a German special unit police officer,” Lange says. “I always smile when readers tell me something like this: ‘At first I thought I could not love him because he is Muslim, but then I realized that he is absolutely, normally German.’ That is what I wanted him to be!”

Not to mention sexy—an important trait for Lange who admits she likes to include at least one love story in each of her books.

While the steamier scenes aren’t difficult to write, Lange says she struggled while penning this second Iskander book, possibly because of the suffering she put her protagonist through, coupled with the added pressure of writing something even more thrilling than 40 Stunden, the first book in the series.

Her efforts clearly paid off though, as she has already begun drafting book three, and the series was just optioned for development of a TV show. Lange hopes these latest developments will help her to find an American publisher that will not only translate the two books in the Iskander series, but also her twenty previous novels in various genres.

Although she’s dabbled in history, young adult, and romance, Lange is happy to have settled in the thriller arena, where she hopes to follow the lead of some of her most inspirational American authors, such as Lee Child and Dennis Lehane.

“I started to write when I was a girl about fourteen and decided I would be a published writer someday,” she says. “My family laughed at me and called me absolutely insane. But I made it nevertheless.”

But not without a lot of hard work and dedication.

In fact, Lange arranged her entire occupational career around her publication goals, starting as an apprentice in a well-known German publishing house, and working her way through just about every corner of the business, including becoming a bookseller at a store that sold crime fiction and theological texts.

“That’s maybe the reason that my Faris Iskander series deals with the topic of religious fundamentalism,” she says.

Despite her industry chops, Lange faced many rejections before landing her first contract with one of Germany’s largest publishing houses in 2005. She’s been writing nonstop ever since, carving out her own niche in the German thriller landscape with meticulously plotted stories that begin on index cards strewn across her dining room table.

“But when I start to write, I leave the plot aside—write, rewrite, and rewrite again,” she says. “My husband can sing songs of terror during these phases because I always tell him that I’ve lost the ability to write anything good.”

Of course, this is the self-doubt that plagues almost all writers, and hasn’t stopped Lange from pushing forward, proving that with hard work, dedication, and a lot of hope, dreams truly can come true. 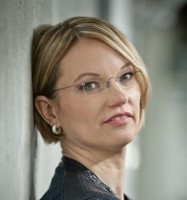 Kathrin Lange was born in 1969 and lives in Northern Germany. In her former life she spent some time working at a theological bookshop. Her exciting thrillers are published by Blanvalet and Arena. Kathrin Lange is deeply committed to the promotion of reading. She also works as a novel writers’ coach, and she is a member of International Thriller Writers, of Syndikat and of Mörderische Schwestern.

To learn more about Kathrin, please visit her website.