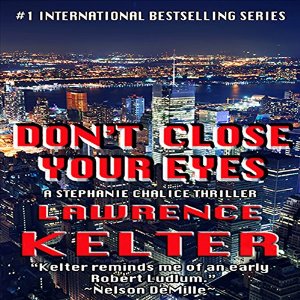 Three very different women have been murdered and NYPD Detective Stephanie Chalice wants to know why. Her case begins on the Roosevelt Island tram. The conductor has been shot, but lying next to him is the real mystery: a woman who might appear to have died of natural causes if not for the handwritten note stuffed in her mouth that simply reads “Look back!” When a second woman is found dead with a rag in her mouth and another cryptic note found nearby, Chalice realizes that a psychopath is stalking Manhattan, on the prowl for a very special type of woman. Part of the murderer’s twisted game is leaving intentional clues for the police, clues designed not only to taunt, but also to do something much worse. Chalice will uncover startling truths about who she really is, but will it help her to discover the killer’s real purpose before another woman dies?

DON’T CLOSE YOUR EYES is available from Amazon.

“Lawrence Kelter is a new novelist who reminds me of an early Robert Ludlum.” – Nelson DeMille

“Chalice’s acerbic repartee is like an arsenal of nuclear missiles.” – BookWire Review

“Edge of the seat tension with a killer on the streets of New York and homicide detective Stephanie Chalice hot on the trail.” – Coffee and Crime

“Chalice is Plum and then some! All the humor and twice the drama.” – Ann Loring, International Women’s Writing Guild

I never expected to be a writer. In fact, I was voted the student least likely to visit a library. (Don’t believe it? Feel free to check my high school yearbook.) Well, times change I suppose, and I have now authored several novels including the internationally bestselling Stephanie Chalice Thriller Series.

Early in my writing career, I received support from none other than bestselling novelist, Nelson DeMille, who reviewed my work and actually put pencil to paper to assist in the editing of the first book. DeMille has been a true inspiration to me and has also given me some tough love. Way before he ever said, “Lawrence Kelter is an exciting new novelist, who reminds me of an early Robert Ludlum,” he told me, “Kid, your work needs editing, but that’s a hell of a lot better than not having talent. Keep it up!”

I’ve lived in the Metro New York area most of my life and rely primarily on locales in Manhattan and Long Island for my stories’ settings. I try very hard to make each novel quickly paced and crammed full of twists, turns, and laughs.