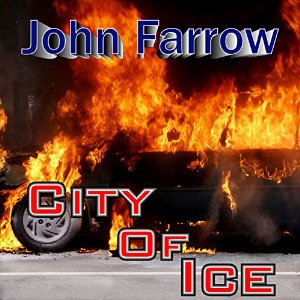 Tortured, then murdered, a university student dressed up as Santa Claus is left hanging from a meat hook on Christmas Eve – a gift intended for one particular cop. Detective Emile Cinq-Mars, local hero and old-style cop, wants the truth – and his gripping search takes him through a bone-chilling Montreal winter and into the heart of the city’s colourful criminal underworld, where rival biker gangs, the Russian Mafia, and meddlers from the CIA all vie for a piece of the frozen city.

“John Farrow’s City of Ice is vintage cop novel—literate, hard-edged, sharp, funny, and mean. All the street reality and ass-kicking you could want, set in Montreal in winter and chilling well beyond that.”
(Alan Furst.)

CITY OF ICE is available from Amazon.

“Rich descriptions of Montreal in winter…blend well with the bone-chilling plot.” (The New York Times)

“Farrow’s orchestration of the plot is masterful…. Like the best of thriller writers, Farrow makes us believe his spooky story could be true.” (The Globe and Mail)

“…in terms of popular genre fiction. ([his] might be the best book ever produced in Canada.” (The Vancouver Sun)

JOHN FARROW is the pen name of Trevor Ferguson, who has written eleven novels and four plays, all to extraordinary acclaim. His Émile Cinq-Mars series has been published around the world and cited by Booklist as “the best series in crime fiction today,” while Die Zeit in Germany suggested that it might be the best series ever. His new novel, the first of a trilogy, THE STORM MURDERS, is being released on May 26, 2015, published by Minotaur, a Thomas Dunne book.