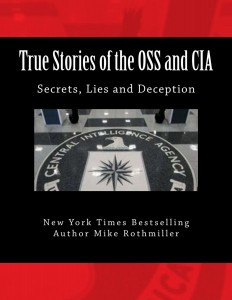 From the time of the earliest conflict, intelligence and psychological warfare has played a significant role, and at times, spelled the difference between victory and defeat. As the commander-in-chief or a military leader in a theater of war, knowing your enemies battle plans, strengths and weaknesses provides a remarkable strategic advantage. Likewise, if you’re able to mislead your enemy into altering their plans or beliefs, you again have achieved an advantage. As in the past, today intelligence and psychological warfare play a significant role in national security and during times of war.

TRUE STORIES OF THE OSS AND CIA is available from Amazon.

“Those fella’s in the CIA don’t just report on wars……they go out and make their own.” President Harry S. Truman

Mike Rothmiller is the author of the NY Times bestseller, “L.A. Secret Police. Inside the Elite LAPD Spy Network” and five other books. He’s a former detective, intelligence officer and award winning television producer and TV reporter. He’s personally briefed the President of the United States, Governors, Senators, foreign dignitaries and generals and admirals. His books have received international acclaim and have been endorsed by three Presidents.