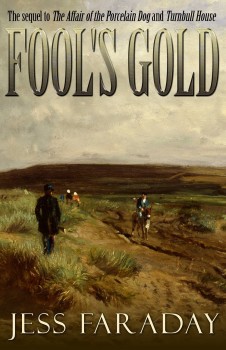 Jess Faraday, to list everything she has done professionally would leave you reading for a while. To name a few, Faraday is the author of the Ira Adler series, which includes The Affair of the Porcelain Dog, a Lambda short-listed book, and Steam-punk thriller The Left Hand of Justice, as well as, some short stories, non-fiction articles, and she’s even worked as a mystery editor for Elm Books.

Faraday realized that she wanted to try writing when she found herself more focussed on finishing all her tasks quickly so she could create stories. Her newest novel, FOOL’S GOLD, continues with Ira Adler finally in a better place until something upsets the balance and then puts him on the trail of a larger scale plot, and leaves him questioning his choices.  Faraday was kind enough to take time out to talk to The Big Thrill.

Tell me about FOOL’S GOLD.

FOOL’S GOLD is the third historical mystery featuring accidental sleuth Ira Adler. In this instalment, Adler, a confidential secretary, has just gotten his life together—financially, personally, and professionally—when an explosion turns everything upside down. With his London life falling down around his ears, he accepts an invitation to accompany friends to California, where he uncovers a plot that stretches from the back streets of Whitechapel to the dusty dirt roads of Porterville. In addition, some chance encounters make him question whether he wants to return to London at all, or to pursue a new life in a new country.

Where did you get the idea for FOOL’S GOLD?

The events of the story wove themselves together while I was writing the second book in the series, Turnbull House. One of the minor characters is American, and Ira needed an excuse to get out of the country. I’m from the west, and have always wanted to write a story set there, so it gave me a good excuse as well. The mysteries always happen in conjunction with former criminal Ira’s somewhat delayed moral development. The third instalment answers some of the questions posed in the first two books, but opens a few more, as Ira contemplates leaving his old life completely behind.

What has the journey been like, so far for the Ira Adler series?

It’s been an awful lot of fun for me. Not so much for Ira. He started out living the life of Riley, being a spoiled plaything of a wealthy older lover. The events of the first book, The Affair of the Porcelain Dog, lead him to question this arrangement. The second book finds Ira wrestling a developing conscience, and in FOOL’S GOLD, Ira makes his final decision. Against this backdrop, Ira battles wits with master criminals, pieces together secret codes, investigates suspicious fires, rescues orphans, and captures train robbers. Never a dull moment for our hero.

How would you describe yourself?

In what ways have you grown as an author?

I’ve learned to work quickly and efficiently. My first novel took three years of steady work and countless drafts. Fool’s Gold was completed in about a year, and was fifty percent longer. Like anything, practice makes improvement.

What do you like to do when you aren’t  writing?

Something physical and outdoors: martial arts, cycling, walking the dog, and hiking.

Any advice for new writers?

FINISH IT. The first draft will always be imperfect, but it will never be done if you don’t finish it. You will likely change things in subsequent drafts, and there will be subsequent drafts.  But you need to be able to say “done” and call it good. The first draft is to lay out the bones. Make it pretty later. Seek feedback from people you trust. Find a writing group, or a friend who can tell you, diplomatically, what is not working. Knowing what doesn’t work is much more useful than compliments. Don’t be afraid of rejection. Nobody likes it, but it’s never personal. Regroup, revise, resubmit, and repeat. 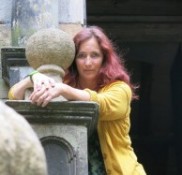 Jess Faraday is the award-winning author of the Ira Adler historical mystery series and the Stein and Vincent adventures, as well as the steampunk thriller The Left Hand of Justice. In addition, she has edited five short story anthologies for Elm Books, two of which have either won, or been shortlisted for awards.