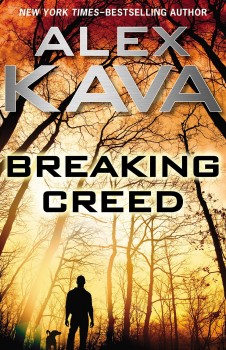 Bestselling author Alex Kava burst onto the publishing landscape in 2000 with her breakout novel, A Perfect evil. Since then, she’s written thirteen books and is the creator of the bestselling Maggie O’Dell series. Now, Kava begins a new series featuring ex-marine Ryder Creed, debuting in BREAKING CREED.

Despite his tough exterior, Ryder has soft spot for animals in need and has built a business rehabilitating abused and discarded dogs he then trains to be search animals. His weakness for the underdog leads him to rescue and harbor a young girl being used as a drug mule—despite the fact that it will make him the target of dangerous and ruthless drug dealers.

In this Q&A, Kava takes time to answer some questions about her start in the industry, her writing process, and what inspired BREAKING CREED.

You’ve stated in interviews that the two years leading up to your first book being published were very tough. You were working several jobs, one of them delivering newspapers, and had to rely on credit cards to make ends meet. What was it that allowed you to persevere in pursuing your dream of writing full-time, when so many others would have given up and gone back to their day jobs?

I was totally burned out in my previous career. I’d spent fifteen years in advertising, marketing and public relations. One day I just decided: “I can’t do this anymore.” I gave my two-weeks notice and quit my job as director of public relations. I’d always wanted to write. So I told myself that while I was trying to figure out what I wanted to do next with my life, I’d write a novel and try to get it published.

Of course I had to give myself a time limit because I knew my savings would only last so long, and I couldn’t afford to go too far into debt. During those two years my roof started leaking, my car had to be replaced along with almost every appliance in my house, and I had to say goodbye to my fourteen-year-old dog. Now it sounds like a bad country western song, but it was very tough. Probably the thing that kept me going the most was simply that I no longer wanted to do what I had been doing for fifteen years. I desperately needed a change even if it meant jeopardizing my comfort level.

What advice would you give to other aspiring authors about making it in this business?

Publishing has changed so much in just the last four years that I’m not sure what advice is worth repeating. If you want something bad enough, make it happen. Self-publishing offers some exciting alternatives. But you still have to write the book[s]. The ideas can’t just stay in your head.

If you had not met your self-imposed deadline of being published by age forty, do you think you would have really given up?

Yes, I would have. I tend to have an entrepreneur’s mentality. I started my own graphic design firm when I was twenty-six. I created a greeting card line and published a singles magazine. All of that taught me when to continue and when to move on.

What went through your mind the first time you saw your name on the New York Times’ bestseller list?

I know it might sound disingenuous, but I honestly don’t remember. There’s so much pressure and expectation to make that list that I probably felt relief. But I will tell you what felt absolutely wonderful—my novel, Stranded was awarded a 2014 Florida Book Award and the 2015 Nebraska Book Award. To have the two places I call home honor me in such a way was an incredible feeling.

To what do you credit your ability to create such a beloved character like Maggie O’Dell?

I wish I knew! Everything about Maggie was quite accidental. I didn’t intend to write a series. She was one of several POVs in my first novel, A Perfect Evil. In fact, in the beginning I found her quite annoying. But I know she resonates with readers because she’s not a superhero. She’s very good at her job but she’s awful at her personal life. She’s slow to trust and stubborn to a fault. The one thing readers can be certain of, is that Maggie fights for what she believes is right no matter the consequences or the risks. And in that sense, she is someone we cheer on.

Let’s talk about your newest character series, Ryder Creed. He’s a tough guy with a soft spot for dogs and underdogs. How did you develop him?

I’ve been fascinated with cadaver dogs for years and have wanted to work one into a novel. Stranded presented the perfect opportunity when Maggie and Tully discover a killer’s burial site. But of course, to use a dog I needed a handler.

Creating Ryder Creed actually came quite easily. His backstory kept coming to me. It’s what drives him. He’s haunted by the disappearance of his younger sister. He joined the Marines to escape and, in his words, “Exchanged one hell for another.” He learned to be a K9 handler while in Afghanistan. Now he rescues abandoned dogs and trains them to search for the missing, the dead, drugs, bombs, etc. The dogs rescue him too, sometimes literally, but always emotionally. And yes, one theme of this series is that Creed continuously gets pulled into dangerous situations to help someone else, when in fact, he would be happy living only in the company of dogs.

Your dedication to your dog Scout brought me to tears. Is there a particular character in BREAKING CREED based on Scout or do several dogs have a characteristic or two of his?

At one point in the novel Jason asks Creed if he can have one of the puppies from a black Lab that Creed has rescued. Jason names him Scout, explaining that Scout Finch in TO KILL A MOCKINGBIRD is one of his favorite characters. That’s actually how I named my Scout, and Jason’s puppy (although a black Lab instead of a white Westie) will grow up through the series with many of my Scout’s characteristics. It’ll be a nice way to continue to keep Scout beside me while I write.

Creed’s dog, Grace, is rewarded with a pink elephant when she successfully completes an assignment. I noticed a pink elephant on your Facebook page. Is this a favorite in your house?

Yes! The pink elephant is my Duncan’s “baby.” He is obsessed with it and heartbroken if the other dogs try to steal it. Lucky for him, I now have about a dozen pink elephants.

The bad guys come up with some very creative and harrowing means of torture. What was your process in developing these scenes?

I do a lot of research for each of my books. Drug cartels are some of the most violent, immoral, despicable criminals that I’ve read about. They’re also some of the most creative when it comes to torture. They don’t just want to hurt the person they’re torturing, they want to instill shock and fear into anyone who would dare cross them. I pushed the envelope a bit and tried to think what kinds of things would trigger my deepest fears—spiders, snakes, fire ants, and scorpions? Yup, that’ll do it!

Tell us about your writing process. Are you a pantser or a plotter?

A little bit of both. I have to know three things before I start—the title, the first chapter, and the last chapter. Then I begin to fill two notebooks with research, bits of dialogue, chapter ideas, backstory tidbits. By the time I’m ready to sit down and write, I have a good deal of what I want in the novel. I plot it out using one of those large kids’ drawing tablets. Usually I plot, then write the book in thirds, leaving room for surprises along the way.

What’s the worst advice you’ve ever received on writing?

The worst? I think it has to be “write what you know.” I grew up in rural Nebraska. Went to college on an art scholarship and spent fifteen years in advertising and public relations—I’m writing about murder. I’m happy to tell you that I am not writing what I know.

If you could dispense just one piece of advice to beginning writers, what would it be?

Read. Read constantly. And most importantly, read the kind of stuff you want to write.

Has your success banished the self-doubt common to most writers, or do you still struggle with that with each new book?

Is there anything that has surprised you about your success?

That no amount of success in this business can be guaranteed or taken for granted, no matter how hard you work or how many fantastic books you write. 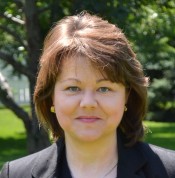 Alex Kava is the New York Times-bestselling author of thirteen novels, including the internationally bestselling mystery series featuring FBI profiler Maggie O’Dell. Her novels have been published in over twenty countries around the world. She is a member of International Thriller Writers and divides her time between Omaha, NE, and Pensacola, FL.