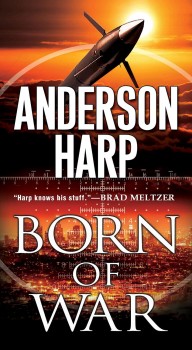 Anderson Harp is known for writing authentic, nail-biting military thrillers, and judging by the advance praise for his latest release, BORN OF WAR, the trend continues.

In addition, Harp is an active member of the International Thriller Writers, spearheading the acclaimed “Operation Thriller”—an initiative that takes thriller writers on a USO tour to visit troops in war-torn countries such as Iraq and Kuwait. Harp was a member of the 2012 Operation Thriller Tour with tour mates Michael Connelly, Brad Meltzer, Joseph Finder, and Kathy Antrim. He is one of only two authors in the history of the USO to attend multiple tours.

We interviewed Harp this month to talk about his fears, his writing process, and his new book, BORN OF WAR.

Please give us a “behind the scenes” look at BORN OF WAR.

Late in the fall of 2012 I had traveled to Salala in the far western region, Oman. It is the last city before the border with Yemen. I was there just after the monsoon season and once beyond the irrigated greenery of the airport, the land quickly turned back into the desolate rocky expanse of the desert. The road took me north, passing further into the desert. Occasionally, we would come across a small valley spotted with small groups of twisted, gnarly trees, somewhat similar to olive groves. The trees produced a sap that when dried became frankincense. This was the same land that the Roman Legions crossed thousands of years before.

It occurred to me that I was on the same road that had been used for the smuggling of weapons from Iran to Yemen and Somalia. A beaten up van, caked brown with dirt, passed. It was not unlike other vans that carried AK-47’s and RPG’s to Yemen and Somalia. The small airport that I had just left also had the likelihood of being a portal for that dissident American determined to join Al Shabaab. A sign on the road marked highway N5 to Salla and terrorism. It would be the same road that my story would take.

With a subject matter that is very sensitive, do you censor yourself in your writing?

BORN OF WAR is a story rich in authentic detail; however, like Tom Clancy, it is sourced by research from a vast number of public accessible military technological and regional intelligence reports. Nevertheless, it does have something that Clancy did not have—someone who served in the military and spent many hours in operations centers covering real world events as its author. And as a result of that experience, it has something else that a Clancy novel did not have—it has been reviewed and cleared by the Pentagon. Anything that is not supported by a public source or crosses over would be removed. So it comes close, very close.

Who is your main character, William Parker?

William Parker is a complex fictional character based upon an amalgamation of serving with Marines that don’t make the headlines but are known within the circle as the Chris Kyle’s, and Maya’s and a Tony Mendez or two.

I had a Gunnery Sergeant that I once served with that had done three tours in Viet Nam with Force Recon. A Force Recon Marine in Viet Nam would sometimes be dropped into the jungle only to be retrieved several weeks later. Parker has a little of the Gunny in him.

He also has some unique talents. He is a hyper polyglot. A Mezzofanti. The Italian cardinal spoke thirty-nine languages fluently. His language skills make him perfect for the present world of tradecraft. But, after Parker’s young wife died, he pulled away from everything and everyone. He is, however, like Shakespeare’s Henry V. He is loyal to his small band of brothers.

Parker might run fifty miles in a day. The running brings out one other aspect of who William Parker is. He lives now only for the challenge. Fear may be somewhere way in the back of his mind, but it doesn’t stop him. Pain doesn’t stop him.

I once had a friend who was a veterinarian. I asked her what was the most remarkable thing she had every observed. Without hesitation, she said, “the capacity of a pit bulldog to absorb pain.” She recounted a story about one that was serving as a watchdog when a strange car drove into someone’s driveway. The dog bit into the tire and would not let go. The frightened driver did not stop. The dog survived.

As one fan said, “The hero Will Parker is a killer with a heart. You want him to be on your side because if you fall upon the whites of his eyes facing you on the wrong side of the battle field, it is a one way ticket to the abyss.”

Thank you; fan, for doing a better job than me of describing Parker.

Parker served several tours in the Marines with Force Recon and has been on deep insertion missions in Korea and Pakistan to name two. He is a capable shot, firing expert in the Marines, and able to hit his target even when the bullets are zipping past his head.

In regards to the genre you write in (military thrillers), what real life scenario are you scared of happening?

The soft targets always remain the nightmare. The malls, the marathons, the events that cause a collection of people who cannot be fully protected. The borders have still yet to be fully tested. And with a terrorist born and raised in America, we can only be on the lookout for the little changes.

What makes one shift his mindset to murder? John Wilkes Booth was not a known criminal before he changed the world. Omar Hammami was the product of a middle class home.

I am intrigued by Russia. It seems to be projecting itself on a path that renews the Cold War. (A source of some of the greatest suspense novels of our times!)

And perhaps some stories in other genres. As a former prosecutor, I had a murder trial or two, and love literary fiction that show the motivation of the human spirit. 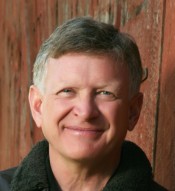 Anderson Harp is the author of the military thrillers Retribution and Born of War (Kensington). He served in the Marines, taught artic survival, mountaineering, and was stationed around the globe. He created the USO’s Operation Thriller. He is a recipient of the Marine Corps Reserve Association’s Non-Sibi Sed Patriae lifetime achievement award.

To learn more about Anderson, please visit his website.