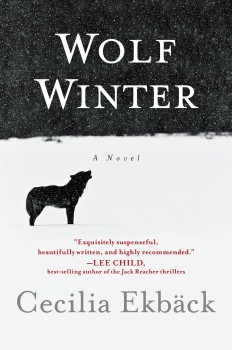 If anyone proves that ITW is international, it is Cecilia Ekback. Her parents are from Lapland; she was born in Sweden, lives in Canada, and has traveled all over the world in her earlier career.  The setting and plot of WOLF WINTER are as unique as the author.

What is your novel about?

WOLF WINTER is set in Swedish Lapland, in 1717, on Blackåsen Mountain where a group of disparate settlers struggle to forge new lives. There are six settlements on the mountain. A day’s journey away is an empty town that only comes alive twice a year when the Church summons her people. Maija, her husband, and two daughters arrive in Blackåsen from Finland to escape past traumas and start over.

Not long after their arrival, the daughters stumble across the mutilated body of a fellow settler, Eriksson. The locals are quick to dismiss the culprit as a wolf or bear. But Maija is unconvinced and compelled by the ghosts of her own past. She just cannot let it rest.

As the seasons change and a harsh winter descends on the settlers, Maija finds herself on a dangerous quest to unearth the secrets of her neighbors and of the Church. But it’s a dangerous pursuit for everyone who has come to Blackåsen, because each of them has come there to escape someone or something.

The setting for WOLF WINTER seems unique and intriguing. Did you start with setting and grow plot and character from there, or did you conceive of this novel in another way?

“Wolf winter,” or Vargavinter, as the word is in Swedish, is a really cold, long, and bitter winter. But it is also how we talk about the worst period in a human being’s life: brought on by loss, or illness. The kind of period that reminds us we are mortal and, ultimately, always alone. My father was my best friend. The period preceding and just after his death was my wolf winter, and the book was written as a riposte to that event. Thus, I started with the idea of characters passing through their wolf winters.

After that came the setting. Blackåsen doesn’t exist as a physical place though its nature is something I remember from my childhood. But more importantly, Blackåsen is the embodiment of what I felt like growing up in the north of Sweden. It represents the fear, the doubts, the religious fervour, the loneliness, and the need to fit in and to belong.

In this book, I wanted “place”—the mountain—to be a character in its own right. Blackåsen Mountain watches the settlers. It doesn’t care. It is dispassionate. It has already seen many of them come and go and it will see many more come and go after them. I brought this place down onto the characters and let it impact them to the fullest.

The characters and the plot grew out of the idea and the setting.

Several of the excellent and varied endorsements you have received for this novel mention the poetic-like language and seductive prose. Hilary Mantel remarks on the style being “visually acute, skilfully written…” As you write, does your style come easily to you or is it hard work?

I am blown away by the praise and feel so grateful.

Style does come easy to me and I find the less I think about it, the better. I think partly it is that I am writing in a language that is not my mother tongue—it gives me an etymological freedom which I might not have otherwise—which, in turn, gives the prose a certain texture.

There are other things that come less easy to me. Plot, for example, is really hard work.

Your background of having parents from Lapland and your Swedish childhood certainly impacts this story. Does this unique early life show itself in the novel? Is the plot and are the characters spun from people and a past you have known or are they figments of your mind?

Yes, I think my childhood is in this story in the shape of the setting, the culture, and drivers such as the Church. The stories of my parents and grandparents are in there. The fear we felt growing up is in there. The characters are spun from people in my past. The plot is all imagination.

Your main character Maija is haunted by the ghost of her past, yet she seems a strong, bold character. Did you set out to create her that way or did she seem to come to life on the page?

Maija has many of the characteristics of the women in my family, stubbornness, strength, wisdom—qualities needed to survive in a harsh world. She is passionate, but harsh. So much remains unsaid. She means well, but she is flawed, human. I knew what I wanted her to be like. Though I didn’t expect her to befriend the priest.

You have studied writing but often a successful writer is “born that way.” How much has your education helped you with WOLF WINTER, or do you think instinctive storytelling propels the book too?

There is a lot of discussion around whether you can teach/learn creative writing, and I would say that there are certain things you cannot teach or learn: perhaps “your eye,” what you see when you look at a person or an object; and also your writer’s voice. But I think that the techniques you can absolutely teach. My education has been really important in helping me become a better plotter.

As a wife and a mother, do you have any advice for writers who are trying to balance “real life” with their careers—and the demands of promotion, once published?

It is so hard!

I try to live in the present—when I am with my daughters, I don’t do emails or spend time on social sites. Likewise, when I sit down to write, or when I travel for promotions, I know I have provided well for them and I try not to worry about them or have a bad conscience (easier said than done!).

I am very disciplined with my time because I don’t have much of it. I used to say that “you can do anything you want if you work hard enough,” and that almost killed me. Now I repeat to myself: “You are a limited human being.” Some things just have to go. I spend half an hour on social sites in the morning before the girls wake up and half an hour in the evening when they are in bed. I write for four hours when they are at nursery. I exercise and then I pick them up. I don’t socialize during the weeks. Writing doesn’t live well in a fragmented life—at least not for me, but I try to keep this “second world” alive by making sure to begin my day with reading what I wrote the previous day, by writing every day, and by ending my day with reading what I’ve written that day.

And then there comes illness, or dentist visits, or… And you have to learn to just let go and not resent.

Can you share with us what you are working on for your second novel?

I am working on a very loose sequel to WOLF WINTER. It is set 130 years later: different people, different dilemma, same curse. I am not quite done with Blackåsen Mountain yet.

Cecilia Ekback was born in the north of Sweden; her parents come from Lapland. During her teens she worked as a journalist and, after university, specialized in marketing. Over twenty years her work for a multinational company took her to Russia, Germany, France, Portugal, the Middle East and the UK. In 2010 she finished a Masters in Creative Writing. She now lives in Calgary with her husband and twin daughters, “returning home” to the landscape and the characters of her childhood through her writing.

To learn more about Cecilia, please visit her website.