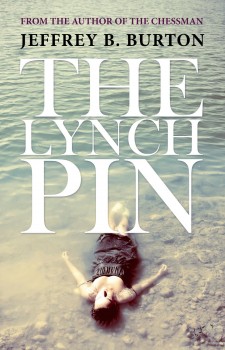 THE LYNCHPIN is the second novel in Jeffrey B. Burton’s Agent Drew Cady mystery series. Its predecessor, The Chessman, came out in 2012 to some excellent reviews, including a starred one in Publishers Weekly, and went on to sell to publishers in Germany, The Netherlands, Turkey, and the U.K.

The novel begins with Agent Cady having turned his life around. He’s waved goodbye to Washington, D.C., and ten-plus years of chasing violent felons for the FBI’s Criminal Investigative Division. He’s moved to Minnesota to be with his fiancée, and now works on the FBI’s Medicare Fraud Strike Force. Life could not be better.

However, Cady’s tranquility is short-lived. He is ordered to help the local authorities investigate the murder of a young woman whose body was pulled from Lake Superior, then his workload doubles when his former boss kills a fellow agent and stands accused of being a spy. Cady’s plans of living the dream dissolve into a nest of killings and foreign intrigue.

Jeffery Burton sat down for an interview with THE BIG THRILL to discuss the second entry into his series.

What does THE LYNCHPIN refer to?

The term refers to a high-level traitor—a mole that’s burrowed his or her way deep into one of our intelligence services and runs numerous cells from that perch. I grew up during the Cold War and, even after the collapse of the Soviet Union, figured it might be a bit of wishful thinking to assume that those involved in the spy trade handed the ball back to the referee, shook hands, and went their merry way.

You mentioned that you met a real-life FBI agent who eventually became the model for your fictional agent. How did that happen?

Some years back when I was managing projects, an FBI agent showed up unannounced one afternoon to question me about an employee who had applied for an embassy position overseas. The agent looked as though he’d been sent from central casting—about six-foot-one, dark suit, dress shoes, early forties, dark hair graying at the temples, and an intense stare that made me fidget. He asked about the employee’s personal habits, both on and off the clock, and even went on to question me about the employee’s drug use and sex life.

The employee had been in my group for under a month, so the agent watched me squirm in my chair while I repeated incantations of “Don’t know. Sorry. Don’t know.” Finally, the agent gave a shrug and mentioned that these were the questions he had to ask as part of the background check. Then he looked me in the eye and said, “You don’t like him, do you?”

I was stunned. Although I’d kept my personal opinion in check, the agent had picked up on my genuine impression about the employee (a cold fish who made no attempt at being sociable). I wanted the employee to get the embassy position—which he ultimately did—and not only because he’d be out of my hair, but, who knows, perhaps being unpleasant is a treasured commodity in a setting such as Syria. Anyway, I got a hunch that there were not many ways a person could deceive this gentleman from the Bureau and pull it off. I mumbled something to the effect of, “He’s not the most cordial of sorts, but there have been no problems. His work has been spotless.”

So let’s flash forward to when I began writing The Chessman, the first Drew Cady mystery. The novel is about an intuitive FBI agent who’s trying to claw his way out of the darkness and murk as the result of an investigation that went horribly awry and it occurred to me who I wanted to model Special Agent Drew Cady after…the agent who paid me a visit as part of a background check on a potential embassy employee all those years ago.

How did you find MP Publishing?

MP Publishing, based in the Isle of Man, is relatively new to the scene. They began acquiring and distributing e-books in 2008. They released their first original title, a touching collection of essays by the likes of John Grisham and Pat Conroy called Don’t Quit Your Day Job: Acclaimed Authors and the Day Jobs They Quit in 2010.

The first book in the Agent Drew Cady series, The Chessman, was published by MacAdam/Cage Publishing. MacAdam/Cage had some great success with novels like The Time Traveler’s Wife, but, sadly, David Poindexter, the president—nice guy and great mentor—passed away in 2013 and the publisher spiraled into bankruptcy in 2014 (twists and turns not only exist in mystery novels). THE LYNCHPIN then worked its way found its way to MP Publishing through mutual editors and I signed with MP in the fall of 2013.

If an idea occurs to me, I’ll jot it down on a piece of scratch paper and toss it in my idea drawer. Then I’ll let the idea ferment for a while to frame the rest of the elements of the story. For example, a few years back I’d jotted down “serial killer in hot pursuit of his own copycat.” Originally, it was going to be a short story, something along the lines of Poe’s The Cask of Amontillado, where the killer has caught his copycat and, whilst exacting revenge, explains exactly why his captor should never have insulted him by stealing his M.O. But the story kept getting longer and longer, and eventually it grew into The Chessman.

In terms of working with editors, I’ve had the great privilege of having Ed Stackler edit both The Chessman and THE LYNCHPIN. Ed edits all of Greg Iles’ novels and his insight is invaluable. Both times Ed provided copious feedback, and after calling the dogs a few less-than-hospitable names, I rolled up my sleeves and wound up incorporating all of Ed’s edits, which made the books much better.

I’ve begun work on the next Drew Cady mystery, tentatively titled The Eulogist. 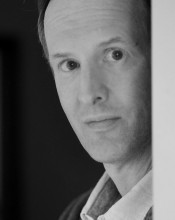 Jeffrey B. Burton was born in Long Beach, California, but grew up in St. Paul, Minnesota. He received a BA in journalism at the University of Minnesota. Burton is a bookworm from way back, but also enjoys skiing, swimming, football, and baseball. His other works include the novel Sleuth Slayer and a short story collection called Shadow Play. Burton is an active member of International Thriller Writers, Mystery Writers of America, the International Association of Crime Writers, and the Horror Writers Association.