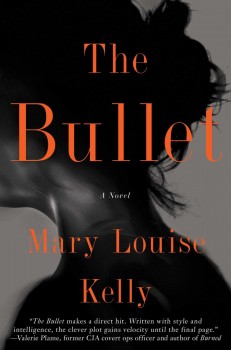 Caroline Cashion’s idyllic upbringing has always been a source of comfort to her, the result of which is a close adult relationship with her parents and siblings. She leads a quiet, academically rich life, spending her days teaching nineteenth-century French literature, and nights with her nose buried in a book. So when her chronic wrist pain leads her to have an MRI, she is stunned to discover that she has been carrying around a bullet in her neck.

One discovery leads to another. As her past unravels, she learns that the first three years of her life are a mystery—her parents are not really her parents, but adopted her and kept it from her all her life. Readers accompany Caroline on her harrowing ride to discover who murdered her birth parents, and whether the evidence she never knew she had, will make her the killer’s next target.

You have extensive experience traveling the world and reporting on very serious matters. Did you find it hard to sequester yourself and spend hours on end in the world of fiction?

It’s just a completely different job. I don’t mean making up a story from scratch; you’d be surprised how much creativity a news reporter exercises every day. Sure, you’re constrained by the facts, but you decide how to tell your story: where to begin it, and which voices to include, and what details to deploy to bring your facts to life. Send two journalists to cover the same dull Senate hearing, and you’ll end up with two very different reports, and one may be vastly more informative and entertaining.

For me, a key difference between daily news and writing fiction is one of scale. A typical news reports for the BBC or NPR runs about four minutes. A typical novel runs about four hundred pages. It’s a fascinating challenge to figure out how to sustain a reader’s interest for that long. Curling up with a novel feels like one of the last holdouts of continuous, deep attention in today’s crazy world. We all have so many demands on our time, and if a reader chooses to invest several hours in my novel, well, I want to make it worth his while.

In what ways has your experience as a reporter influenced your fiction writing?

I am and will always be a reporter; I sweat the details in my fiction as carefully as I would for a news story. That’s half the fun! One of the joys of being a journalist is exploring worlds that would otherwise be closed to you, and talking to people who otherwise would not take your call. For THE BULLET I interviewed everyone from doctors to morticians to experts in French literature; I trawled through Georgia property archives; I visited every place that Caroline Cashion goes, from Atlanta cemeteries to Washington hospitals to Paris street markets. (Note to self: Set next novel on some warm Caribbean island? With the central murder taking place at a beach bar, one with a long cocktail menu, requiring extensive research and long writing sessions in situ.)

What was the impetus to begin writing fiction?

I always thought it would be fun to write a novel. But I didn’t get serious until one day a few years ago, in Baghdad. At the time I was NPR’s Pentagon correspondent, and I was on assignment covering the Secretary of Defense. This particular trip had started in Jerusalem. Then it was on to Amman, followed by a stop at a military airbase near Nasiriyah, in the scorched desert of southern Iraq. By the time we arrived in Baghdad, a sandstorm was blowing in. The city was not safe enough to drive through, so a swarm of Blackhawk helicopters was organized, to whisk us from the airstrip to a press conference at the Iraqi defense ministry. As we were strapping in for take-off, my phone vibrated. I fumbled for it under my flak jacket and pushed back my helmet to answer. It was the nurse at my children’s school, back home in Washington. My then-four-year-old son was sick—really sick—and she was trying to find me, and get him to a hospital. As I was explaining where I was, the line went dead. The Blackhawk lifted off. My son needed me, and I was in a helicopter halfway around the world, gazing down over the tangled traffic of Baghdad. That night I dragged myself into my bunk bed, in the trailer where the press corps had been assigned to sleep, and I wept. On the flight home I started writing a spy novel. I named my protagonist Alexandra James, after my sons Alexander and James, to remind me why I was doing it.

Are there topics you would consider taboo to write about?

A mystery writer with many books under his belt once warned me, “Don’t kill off the dog.” I must have looked puzzled, because he leaned closer and whispered, “Readers will eat up the most grisly murder scenes; they can handle bombs and bioterrorism and plague and decomposing bodies and all kinds of evil, but they will never forgive you if you let any harm befall a dog.” Wise man. I am happy to report that Hunt, the family beagle in THE BULLET, survives the mayhem unscathed.

I have a nice home office, with crimson walls and a scuffed-up leather armchair and deep shelves of spy histories (I covered the intelligence beat for years for NPR). But I confess I don’t get my best writing done there. It’s too quiet. This is a hangover from years of banging out stories on deadline in loud newsrooms: I need cacophonous background noise to focus. I often pack my laptop and camp out in the undergraduate library at Georgetown University, where students gleefully ignore the signs enforcing quiet. Also, trains. Some of my favorite chapters have been written on the three-hour Amtrak trip from DC to New York.

Tell us something about yourself that we would find surprising.

I am deaf. Or—if not quite deaf—living with severe hearing loss. For a long time I wondered why everyone mumbled, all the time. But I wasn’t formally diagnosed until last summer, at age forty-three, after a frustrating year of book signings in which I struggled to hear the audience questions. Without hearing aids, I miss about seventy percent of normal conversation. Happily, hearing aids these days are sleek, tiny little gizmos. If you didn’t know to look, you would never notice I’m wearing them.

What are some of your hobbies?

I cook, I read, I try to make it to a yoga class once in a blue moon. But honestly, who has time for hobbies when you work and have young kids? My main thing is I run. Not fast, not far, but regularly. It clears my head and transforms my mood like nothing else. It also helps me write: I can sit hunched over my keyboard for an entire morning, groaning in frustration that I can’t crank out a single coherent sentence, and then I give up and go outside for a run, and the dialogue magically writes itself in my head. My family knows to steer clear when I walk in the door after a long weekend loop, because I need a few minutes alone to scribble all the ideas I’ve just had in my reporter’s notebook.

What book do you wish you had written?

Every time I read something by Ann Patchett or Ian McEwan or Jhumpa Lahiri or Junot Diaz, I wish I’d written it. In the suspense genre, I’d love to have thought up some of fellow spy novelist David Ignatius’s plots.

I usually have three books on the go at once: a mystery, a more literary work of fiction, and something non-fiction. Which one I pick up depends on my mood. Right now I’m deep into I Am Pilgrim by Terry Hayes, The Goldfinch by Donna Tartt (I must be the last member of any book club, anywhere, not to have read this yet) and Ann Patchett’s This is the Story of a Happy Marriage, a collection of essays that is only occasionally about marriage and more about the life of a writer. Next on my nightstand: 88 Days to Kandahar by Robert Grenier, a former CIA counterterrorism chief whom I first met while covering the spy beat. Also, Julia Dahl’s debut crime novel Invisible City, which is set in Brooklyn and which I am really looking forward to.

What is the last book you read that stayed with you long after you closed the cover?

Hilary Mantel’s Wolf Hall has stayed with me for years. What rich characters, what a way with words! I considered it a perfect work of historical fiction, and then, damn it, she went and wrote an even better one with Bring Up the Bodies. There’s one more to come in her Cromwell trilogy. I don’t know if they’ve set the pub date yet for it, but I’m resigning myself to not getting anything else done that week.

Visit Mary Louise’s website to learn more about her and her work. 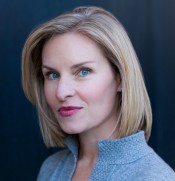 Mary Louise Kelly spent two decades traveling the world as a reporter for NPR and the BBC. Her assignments have taken her from grimy Belfast bars to the glittering ports of the Persian Gulf, and from mosques in Hamburg to the ruined deserts of Iraq. As an NPR correspondent covering the intelligence beat and the Pentagon, she reported on wars, terrorism, and rising nuclear powers. A Georgia native, her first job was working as a staff writer at The Atlanta Journal-Constitution. Kelly was educated at Harvard and at Cambridge University in England. She lives in Washington, DC, and Florence, Italy, with her husband and their two children.