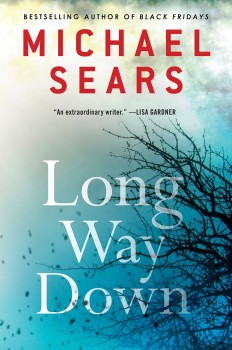 I was in the Albany auditorium during the 2013 Barry Awards ceremony when Michael Sears and I both did not hear our names called for Best First Novel. About an hour later as we walked to a local bar to get some help with our mutual disappointment, he took the opportunity to call his wife.

“Hey, Hon” I remember him saying, “this not winning thing is getting a lot easier.” He laughed at something she said, but I could tell he’d rather be making the phone call for another reason. Michael’s first book, Black Fridays, had garnered five nominations and the Barry was the fourth one he “did not win.”

The following evening he took home the Shamus Award for “Best First P.I. Novel.” (“I didn’t even know I had written a P.I. Novel.”) He was so excited he called his mother and told her about the victory.

“Wonderful,” she said. “You won the Irish award.”

“I tried to spell the name for her,” he told me sometime later, “but she wouldn’t hear of it. She spelled it for me. To her it was the Seamus Award. And I had a second cousin Seamus so…it’s now known as ‘The Irish Award.’”

Speaking of cousins, Michael has always been close to his, and this was one of the reasons he decided to give his hero, ex­–Wall Street wizard and ex-con Jason Stafford, a son who has autism. Two of his cousins have children “on the spectrum,” and Michael feels a great responsibility to get it right. (As a special education teacher, I can tell you he does just that.)

“Having a kid with autism,” he explained, “is an everyday reminder of never being able to do enough for your kids. It’s constant guilt. I’ve always been interested in writing about fathers and sons, and I felt very confident I could do this particular type of relationship. I read Temple Grandin’s book on how to parent an autistic child and I remember thinking, ‘This is true for any parent.’ The relationship between a parent and their child with autism is just so much more.”

Much like his creator, Jason Stafford spent many years on Wall Street and found himself caught up in an out-of-control financial situation (unlike Sears) that earned him two years in prison. So was Michael ever tempted by some of that low-hanging fruit during his twenty-plus years on The Street?

“I understand that pressure to produce,” he said. “Sure you were the hero yesterday, but what have you brought in today? You get that attitude like, ‘I’m a player. I can’t be down three days running.’ But, hey, we were paid well. It was our responsibility to keep our eyes up and do the honorable thing. It’s understandable how someone could step over the line, but in my days as a manager it was my job to raise my hand if I saw something that made me uncomfortable. Maybe I’d have to take a junior trader aside and say, ‘I see what’s going on and it’s not to be repeated.’ There’s stuff that’s legal and stuff that’s allowed and then there’s the other stuff, but I was lucky. I was with a good group of guys and women who did the right thing day in and day out.”

Unlike the typical Wall Streeter, Michael has a strong background in acting. He’s done his fair share of Shakespeare and has also appeared on TV and in film. How do his acting skills affect his writing?

One of the well-drawn characters in Michael’s latest, A LONG WAY DOWN, is a banker who does not mind taking some of his remuneration in the form of cocaine. We meet this guy as the book opens; he’s enjoying some of the good stuff sent to him by a grateful client. How did Michael make this scene so realistic?

After mumbling something that ended with the phrase, “misspent youth,” Michael elaborated. “There’s a doctor in my family. So I was able to ask him not only about the physiological and psychological effects of cocaine use, but also what one could add to it in order to make it deadly.” (Spoiler alert: the banker doesn’t make it to Scene Two.)

Did this guy have a backstory? I asked. Was it hard to kill him off?

“No, I was excited about that.” He laughed. “We were having a family dinner—my son was home—and I was upstairs writing as they were putting the dinner together and I came down with a big grin on my face. When they asked me what was going on, I yelled out, ‘I just killed the banker!’ It was a great feeling.”

Our talk was coming to a close and Michael was sure to remind me that he was on his way to Florida the next day for SleuthFest. He was going to teach a workshop and appear on a panel. What’s his dream panel?

Without hesitation, he said, “As a moderator, I’d want Hank Phillippi Ryan. She’s a top-notch journalist and knows how to ask a question. She’s also got a knack of making the panel members look good.” He paused for a few seconds. “Reed Farrel Coleman. I’d want Reed on the panel because he’s a terrific storyteller. He knows how to share the panel and doesn’t put up with any bullshit from anyone.”

Any dead guys he’d like to be on that panel?

“Oh, yeah. Elmore Leonard and Robert Parker. We’d talk about dialogue and how you could write a scene that’s almost entirely people talking. I love when you can put down on paper all of the characters’ voices that are in your head. And George Higgins. He wrote whole books that were almost all dialogue.”

One more question came to mind since Michael had mentioned Reed Farrel Coleman who just took over Parker’s Jesse Stone series. Is there a series character that he’d like to take on?

“Travis McGee,” he said, not missing a beat. “That would be really cool. But I don’t see anyone asking me to do that anytime soon.”

At least, I reminded him, he was leaving frigid New York and heading to Florida the next day where he could do some hypothetical research.

Michael Sears spent over twenty years on Wall Street, rising to become a managing director at Paine Webber and Jeffries & Co., before leaving the business in 2005. He lives in Sea Cliff, New York, where he is at work on his next book featuring Jason Stafford and his son.