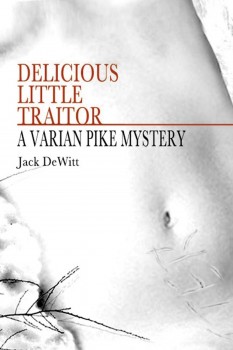 From the likes of Duane Steck’s homebuilt Moonglow ’54 Chevy to Bob McCoy’s Raked and Flamed ’40 Ford Sedan, and almost everything in-between, DeWitt has researched cars, driven them, customized them, and written about them in various articles, blog posts, books, and even, poems.

His latest published work, DELICIOUS LITTLE TRAITOR, featuring Varian Pike, has little to do with hot rods, but it is certainly written with the same meticulous research for which DeWitt is known.

DELICIOUS LITTLE TRAITOR begins quietly in December 1953 when rugged WWII vet and now private investigator Varian Pike looks into the disappearance of a missing young girl and lands in the middle of a war between federal agencies. Along the way he finds that almost everyone has a deep secret and a grudge to settle—especially the girl.

Pike isn’t much of a talker but “he is very good at what he does, not because he has any special mental or physical abilities, but because he just hangs in there,” DeWitt says. “He has tried hard to simplify his life: Do the job. Be loyal to those who deserve loyalty. Stay in the shadows. Hide the scars. He loves jazz and movies. In fact, his worldview is almost entirely taken from Hollywood.”

An intriguing perspective, given that the book is set in the fifties, a period in time that represents a distinct dividing line in culture. As DeWitt notes, the fifties hardly age.

“James Dean, Elvis, and Marilyn Monroe are still used to sell stuff without any sense they are historical figures,” he says. “The clothes I wore in the fifties, I still wear today and I don’t look weird—khakis, boat shoes, crew neck sweaters, tweed sports jackets. Johnny’s motorcycle jacket from The Wild One is still in fashion. People are modifying fifties cars or building earlier models as fifties hotrods. This is an odd and fascinating phenomenon.”

Indeed, the deeper one examines the era, the easier it is to see what—beyond the era’s cars—inspired the setting for DELICIOUS LITTLE TRAITOR.

The novel, which teeters to this side of noir, is also peppered with multi-layered history, humor, and a system of patterns DeWitt hopes resonate with his readers. “I like playing with patterns, and there are many in the book,” he says. “For example, two young women, two codes, two pairs of agents, and so on.”

DeWitt admits his writing has been deeply influenced by the classic detective novels he read beginning in high school. He was drawn in by the atmosphere, wisecracking dialogue, and the detective heroes themselves, more so than the actual mysteries. In fact, despite his foray into the genre, you’re more likely to find a psychology or history book than a work of fiction on DeWitt’s bedside table.

A literary professor by trade, DeWitt began his writing career with poetry, before attempting several novels that could be categorized as sensitive, impressionistic, and, unfortunately, by his own admission, somewhat lacking in plot.

“In short, pretty boring and not very good,” he says. “I decided I need the discipline and control that a mystery/detective story forces on me. With a mystery, you continually have to move forward.”

That isn’t to say he won’t go back to poetry or non-fiction at some point. With DELICIOUS LITTLE TRAITOR out in the public, and his second book, currently called Beat Bop, already written, DeWitt is plotting out two more Varian Pike books—which, he says, will likely stifle his poetic voice.

“I’m sure that I use different neurons and synapses when I write fiction,” he says. “When I’m writing a story, I see it and hear it. When I’m working on a poem, I see words and hear them. As I am working on a story, I occasionally get an inspiration for a poem, but I seldom follow it through.”

With all of his writing, the idea starts with a situation, and once he has jotted down a few key details, DeWitt works steadily, with purpose, every day until he runs out of steam. This all-consuming work ethic was one of the catalysts for DeWitt’s earlier-than-intended retirement.

“I was able to finish a draft of Beat Bop in three months because I could work seven days a week,” he says.

Soon after he retired, DeWitt began sending out queries to agents and publishers. And like most writers diving into the ever-evolving publishing world, his journey to publication was met first with resistance—and silence. He quietly compiled the advice offered in various rejection letters and began focusing on smaller publishers.

“I was working my way through the alphabet when I hit Black Opal Books,” he says. “To my surprise and delight, they offered me a contract.” 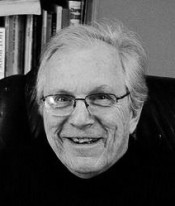 Jack DeWitt is a poet, a chronicler of car culture and a novelist. His study of American hot rodding, Cool Cars, High Art: The Rise of Kustom Kulture is included in the Street Rodder Hall of Fame. For three years he wrote the column “Cars and Culture” for the American Poetry Review. One of the columns was chosen as a notable essay in Best American Essays 2010. Almost Grown, his latest book of poems, is about growing up in Stamford, CT. For many years he taught in the Liberal Arts Division of the University of the Arts in Philadelphia.