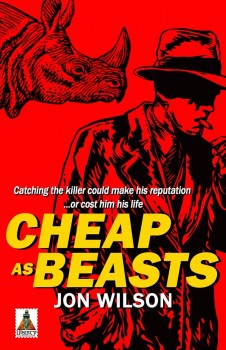 Jon Wilson dives head first into the mystery/thriller genre with his latest novel, CHEAP AS BEASTS.

Like most soldiers, Declan Colette lost his fair share in the war—in his case a sailor, drowned off Iwo Jima. Since then he’s been scratching out a living as a cut-rate PI, drinking too much, and flirting with danger. Then a girl arranges to consult him, only to be murdered en route, and the cops tag Colette as their prime suspect. To save his neck he’ll need to find the real killer, a quest that pits him against a rival detective firm, a dangerously rich family, and a desperate foe whose murdering ways started back during the war.

Could this be the case he’s been waiting for? Catching the killer could make his reputation. Failing, could cost him his life.

Jon took some quality time to chat with The Big Thrill.

What compels you to write?

An innate inability to do anything else. Life has shown me to have no aptitude for any job that requires I rise at a decent hour.

Also, I’ve always written stories and loved books—or at least since I was old enough to know what they were. I’ve actually dreamt my whole life of becoming a published author and I’m a little perturbed that it took so long. Well, better late than never I suppose.

What sparked the idea for CHEAP AS BEASTS? Why write a mystery since you are known for your westerns? Does genre matter?

I’ve also written a fantasy novel: The Obsidian Man. So, I suppose an argument could be made that I’ve been exploring my options…Although, I suspect even ten years ago, all my books might have been lumped into the “gay” genre and dismissed, so I appreciate the question.

I do tend more toward stories than genres, though I am working on a trio of detective novels featuring my protagonist, Declan Colette (introduced in CHEAP AS BEASTS). The second novel, Every Unworthy Thing, is due out in November of this year.

I tell people (mostly joking) that CHEAP AS BEASTS began as an angry reaction to the first fifty-odd pages of The Big Sleep. There’s a particular line in Chandler’s book that hit me like a sock to the jaw. (I won’t quote the line—mainly because I don’t have the book handy—but confess I included an allusion to it in my book.) Nevertheless, even if my myth contains elements of truth, I finished CHEAP AS BEASTS because of my abiding love for all things Dashiel Hammett. And, based on the number of projects I’ve started and discarded over the years, what aided me in completing the novel is more deserving of praise than what made me start it.

As to my westerns…A Hundred Little Lies, my debut novel, had many elements of mystery to it. In fact, some people felt I was a bit too mysterious. I set out to explore the nature of perceived truth vs. actual truth and, as a result, decided it might be interesting to keep my narrator in the dark about a lot of what was going on around him. I may have succeeded a bit too well in that endeavor. Of course, having stated that, I may also need to explore the nature of perceived success vs. actual success, because I certainly heard from a fair number of readers who thought I left them hanging.

How difficult is it to write LGBTQ stories set in the past?

I think, for me at least, it’s easier than writing stories about straight people in the past. And, I suspect, no more difficult than it is for your average straight writer to write stories about straight people in the past. It certainly adds an additional psychological layer to your character(s). Although, on the other hand, I doubt very much LGBTQ lives from about fifty years ago, and stretching further back, were markedly different from straight lives in their day-to-day routines. In most cases there doesn’t seem to have been anything like a queer identity as we think of it today (although in certain societies what we might broadly term queer members have managed to create a niche for themselves). In my westerns, I’ve tended to treat homosexuality as a trait rather than an identity—not unlike making a character left-handed or blond.

I also think, and this is based purely on anecdotal evidence, the world in which my childhood happened—the seventies and eighties—was not so unlike the world of the previous two hundred years with regard to childhood and homosexuality. Certainly the general attitude of the pre-AIDS era towards homosexuality was quite different from the modern perspective. I actually consider myself (somewhat?) lucky to have come of age during a time of such tremendous social change. If for no other reason than it gives me perspective on how things used to be. I’ve met young gay people today who can’t fathom what life was like for gay people prior to 1988. (1988! Suddenly I feel old. Let’s continue this after my nap.)

Do you prefer the western or the mystery genre?

The smart, concise answer would be to say I don’t have a preference. But I do. Although it may be more a preference for the period than the genre. After all, my mysteries are also “historical” in that I’ve set them in 1948. (I once had a college professor explain to me that “history” ended with Watergate and anything after that is part of “political science.” I can’t say she wasn’t being slightly insouciant, but I certainly took it as gospel at the time.)

So, period-wise, I prefer the mysteries. I like that Golden Age between World War Two and Korea—despite the fact, which I’ve repeated elsewhere, that I’m not really one for hats. That preference may be bolstered by the fact I’m currently working hard on the mysteries. I do have at least one more western in me. It’s a story I came up with a while back that I am keen to share. When I find the time.

Now, having said all that, I usually find myself writing the stories I want to read. And my tastes are capricious.

What do you like the most about CHEAP AS BEASTS? Did you initially plan it as a series?

I do like my guy, Declan Colette. I like the couple of surprise minor characters who appear briefly and show no signs of wanting to surrender the stage. Of course, that’s generally what I love most about writing: the pleasurable discovery that the character previously described as Cop #2 has magically become a real person right before my eyes—with a full backstory and foreseeable future.

Which leads nicely to the next question. Yes, CHEAP AS BEASTS is the first of a planned series. The sequel, Every Unworthy Thing, is due out in November—have I mentioned that? The series is mainly to do with giving Cop #2 more screen time. I kid, of course.

What can a reader expect when they pick up one of your novels?

Hopefully to be entertained. I consider that my chief mission as a writer. When, as a child, I tried (and failed) at being funny, my dad used to ask me: “What’s the first rule of a joke?” (The answer: “It needs to be funny.”) And when I’m writing, I apply a variation of that rule to my work: is this entertaining? It’s all well and good to explore life’s eternal questions or explain the effects of capitalism on man’s morality (or even perceived vs. actual truth), but if I’m boring my reader, why bother? (I’m not suggesting that brilliant, non-boring books haven’t been written on those subjects, by the way.)

The sequels of course. And a month of videogames in between them. I’m desperate to play Dragon Age 3. And I want to try Skyrim on my PC with a bunch of user mods (I’ve only played it on my PS3). I’ve also never been to a writers’ conference nor a book show, so I’d like to experience those. Isn’t there a new season of House of Cards? So many things… 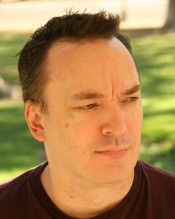 Growing up, Jon Wilson wanted to be a stunt man, a professional wrestler or a rodeo clown. After breaking his neck in 2001, he decided writing might be safer. He was wrong. Currently living in California, he is occasionally hard at work on his next novel.