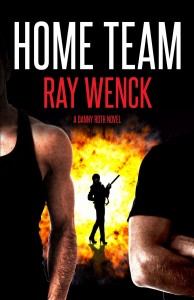 It’s never a good beginning when the the girl fails to show up for the first date. Tony is devastated until he discovers she did not show up for work either. Using Danny’s contacts they discover Marissa, an undercover cop, was working on infiltrating a new drug organization who has been eliminating the local competition. Within the department, it is feared, it might already be too late for Marissa, but Tony is not ready to give her up for dead.

Danny and Tony call in favors and hit contacts the police don’t have. The lead they develop has taken precious time. Forming a hasty plan, Danny, Tony and their team of friends set out on a rescue mission, but will Marissa still be alive.

HOME TEAM is available from Amazon.

Ray Wenck is a retired school teacher. As well, he owned and operated an Italian restaurant for 25 years. Home Team is the third release in the Danny Roth series. Random Survival, a post-apocalyptic thriller, is also available.

The Colony: Shift (Book 5 of The Colony Saga) by Michaelbrent Collings