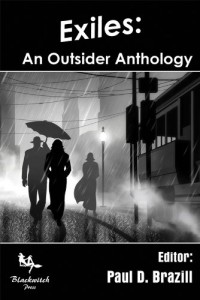 EXILES is available from Amazon and Amazon UK.

I  was born in England and am now on the lam in Poland. I left school at sixteen and my first job was on a government scheme updating Ordinance Survey Maps. It wasn’t as glamorous as it sounds. I’ve worked in a second-hand record shop and played bass in a couple of post-punk bands. I’ve been EFL teaching for over ten years and still seem to be getting away with it.I’m the author of A Case Of Noir, Guns Of Brixton, Roman Dalton- Werewolf PI and a few other tasty snacks that you can find here.My writing has quite shockingly been translated into Italian, Polish and Slovene. I know! I’ve had stories published in various magazines and anthologies, including The Mammoth Book Of Best British Crime 8, 10 and 11 – alongside the likes of Lee Child, Ian Rankin and Neil Gaiman. Which is nice.I also edited the charity anthology True Brit Grit, along with Luca Veste, and a couple of other things, too.Oh, and I regularly contribute to Pulp Metal Magazine and have a regular column – Brit Grit Alley – at Out Of The Gutter Online. I’m a member of International Thriller Writers Inc.

June 9 - 15: "Are thriller writers biased? Or do some of us go too far in trying to beat down stereotypes?"

The Colony: Shift (Book 5 of The Colony Saga) by Michaelbrent Collings