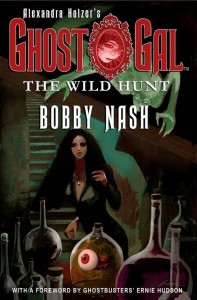 Raven’s Head Press has released Alexandra Holzer’s Ghost Gal: The Wild Hunt, a novel by Bobby Nash for immediate purchase as an ebook for the Kindle on Amazon.

About GHOST GAL: THE WILD HUNT–
Alexandra Holzer is just your average young paranormal investigator out to show an early 1960s New York City she knows a thing or two about ghosts. Join Alex’s alter ego, GHOST GAL, and her fiancé, Joshua Demerest as they do battle with a very ancient ghost and his pals who have a score to settle with her famed father, ghost hunter, Hans Holzer.

Alexandra Holzer’s Ghost Gal: The Wild Hunt by Bobby Nash is the first book in a series of new horror/adventures novels from Raven’s Head Press.

Listen to Michael, Alexandra, and Bobby discuss Ghost Gal on ESO episode 184 where they also braved The Geek Seat. You can hear it here.
Up next: Ghost Gal Book 2– “A Haunting We Will Go…” by Bobby Nash.

Between writing deadlines, Bobby is an actor and extra in movies and television, including appearances in Deviant Pictures’ Fat Chance, FOX’s The Following, USA’s Satisfaction, AMC’s Halt and Catch Fire, and more. He is also the co-host of the Earth Station One podcast (www.esopodcast.com) and a member of the International Association of Media Tie-in Writers and International Thriller Writers.

The Alternative Gambit by Steve DeWinter