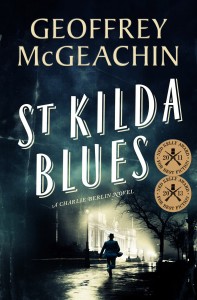 Writing historical crime fiction obviously requires that a huge amount of time and effort be spent on researching the location and era your characters will be inhabiting before you can even come close to creating the lives they will be leading and the challenges, characters, and crimes they will encounter. Once you complete your research, you then have to toss most of it out the window, leaving just enough to convince your readers that what is happening is really happening in that place and time. Trying to cram most of that research in to the story to justify the time spent can kill a story deader than the girl they drag out of the lake at the start of ST KILDA BLUES.

ST KILDA BLUES, the third book in my Charlie Berlin series, is set in Melbourne, Australia, in 1967, taking place in and around the shabby, bayside, red-light district suburb that gives the novel its title. Charlie Berlin is a police detective and former World War II bomber pilot who served in combat in Europe with the RAF. An ex-POW, he survived not only the loss of his bomber and crew over Germany but also the horror of a forced march through winter blizzards in Poland in 1945. Today Berlin would be diagnosed as suffering from PTSD, but in 1945 he and men like him were simply demobilized and sent home, advised to forget what they had been through and witnessed and told to just get on with their lives. Charlie is mostly successful at this, but from time to time his tenuous grasp on reality slips and he finds himself back on a snow-covered road in Poland and witness to the shockingly casual murder of a young woman there. One reviewer summed Detective Sergeant Berlin up nicely as a decent but damaged man, but also a survivor.

In ST KILDA BLUES, Berlin finds stuck in a rut with little chance of further promotion, and gets roped into an unofficial investigation involving several missing girls because the father of the latest victim has political connections. While Charlie has his demons to fight, I decided early on in the series to give him a mostly happy home life with a supportive though independent wife and a couple of less-than-perfect kids to love and worry about. Woven through the story of the crime, the political infighting, the future of Berlin’s wife’s career as a photographer, his hopes and plans for his children, is the back story of the killer and some rather unpleasant facts about a post-war British child migration scheme that sent orphans to Australia, where many were exploited and abused. There is also a disturbing chance encounter along the way that threatens to unhinge Berlin, upsetting the delicately balanced life of denial he has constructed for himself and releasing sublimated self-destructive aspects of his character.

So far this might all sound a bit grim, but the story is set in 1967’s Summer of Love, which for Australia, as in the U.S., was an era of radical social change and rebellion. Melbourne has hippies, an exploding music and fashion scene, women’s lib, very short skirts, very long hair, free love, and a war in Vietnam that still seemed worthwhile and winnable to some. There was a huge amount of color, language, texture, and context to play with, and while this can be a lot of fun, as with the historical detail, I had to be wary of losing control of the story. The editing process can and should be brutal to serve the story and characters and the team at Penguin were really enthusiastic and supportive in this respect, as well as in creating a moody and evocative cover design.

The first two books in the Charlie Berlin series were set in 1947 and 1957, respectively. Obviously each needed extensive research on the period and locations before the storytelling could begin, but the payoff was that each novel won an Australian Crime Writers Association Ned Kelly award for Best Fiction. Of course that puts an author under a lot of pressure when it comes to the next book in the series.

With ST KILDA BLUES I think I’ve achieved what I set out to do, having Charlie Berlin grow and succeed and learn and survive with his basic decency intact despite all the terrible times I put him through. Advance reviews, I’m happy to report, seem to concur. Books+Publishing Australia had this to say: “’A terrific read with great plot twists, complex characters and a menacing atmosphere.” And SunCoastBookReviews.com echoed the sentiments suggested by the first two awards by calling my third outing “possibly the best Australian police crime thriller I have read and is at the top of my list of police crime thrillers worldwide.”

In writing ST KILDA BLUES, I created some very disturbing characters and events that gave me chills as I was working—and still do now.

Geoffrey McGeachin has spent much of his life shooting pictures for advertising, travel, theatre and feature films. His work has taken him all over the world including stints living in Los Angeles, New York and Hong Kong. He is now based in Sydney, where he teaches photography and writes.

He has written seven novels, the most recent of which are his Detective Charlie Berlin series. The first two Charlie Berlin novels, THE DIGGERS REST HOTEL and BLACKWATTLE CREEK both received Australia’s highest crime-writing accolade, The Ned Kelly Award for Best Fiction.

To learn more about Geoffrey, please visit his website.