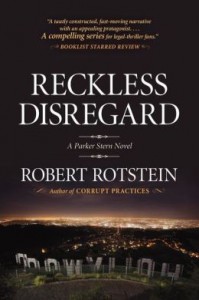 Author Robert Rotstein returns with his sophomore release in his Parker Stern series, RECKLESS DISREGARD. Robert’s background is cemented in Los Angeles, being an entertainment attorney for over thirty years. Robert grew up in Southern California and fell in love early with legal thrillers, especially the television shows Perry Mason and The Defenders. Robert graduated from UCLA law school and went into private practice shortly after, where he handled cases for many celebrities including Michael Jackson, Quincy Jones, and Lionel Ritchie.

His first book, CORRUPT PRACTICES, introduced fans to his character Parker Stern. He received many top reviews, including praise from New York Times bestselling author Sue Grafton: “This is a terrific book…. A fresh take on the legal thriller… [with] maximum intrigue and suspense.” Let’s take a look inside RECKLESS DISREGARD:

Former topnotch attorney Parker Stern, still crippled by courtroom stage fright, takes on a dicey case for an elusive video game designer known to the world only by the name of “Poniard.”  In Poniard’s blockbuster online video game, Abduction!, a real-life movie mogul is charged with kidnapping and murdering a beautiful actress who disappeared in the 1980s. Predictably, the mogul—William “the Conqueror” Bishop—has responded with a libel lawsuit. Now it’s up to Parker to defend the game designer in the suit.

In defending Poniard, Parker discovers that people aren’t always who they claim to be and that nothing is as it seems. At one point, his client resorts to blackmail, threatening to expose a dark secret about Parker. Then, many of the potential witnesses who could have helped the case die prematurely, and the survivors are too frightened to talk. Parker begins to feel as if he’s merely a character in a video game, fighting malevolent Level Bosses who appear out of nowhere and threaten to destroy him.

THE BIG THRILL caught up with Robert for a few questions about his latest book.

Give us some insights into RECKLESS DISREGARD that are not on the back cover.

Parker Stern’s client is a faceless video-game designer named Poniard, who’s been sued for libel by media mogul William “The Conqueror” Bishop. Poniard’s game Abduction! accuses Bishop of kidnapping and murdering an actress in the 1980s.Poniard and Bishop are each trying to bring the other down, and the fight gets violent. As one review described the novel, “the action tends to mimic a video game, with Stern getting more and more enmeshed with false leads and bad guys.” That’s exactly the impression I was trying to convey. Set against a noir background of murder and deceit, the novel is in many ways an allegory for the real-life struggle between our old forms of entertainment (movies and TV) and the emerging forms (Internet, interactive video games, and so on).

How has Parker progressed from CORRUPT PRACTICES, the first book he appeared in, to this newest offering?

In CORRUPT PRACTICES, Parker suffered from stage fright whenever he walked into a courtroom, and in RECKLESS DISREGARD he’s still struggling to overcome his fears. At the beginning of the book, he’s actually left the practice of law to become a mediator—a much less stressful job. But then Poniard calls seeking representation in the libel suit, and Parker’s love of trial work—along with a chance to solve a personal mystery—convinces him to take the case. He doggedly pursues the truth, all the while trying to come to grips with his fear.

What was your biggest challenge in writing your second book?

Conceiving a video game and depicting the game convincingly. Abduction! plays a major role in the novel. Not only does it give clues to what might have happened to the missing actress, but it also, at times, seems to predict the future. Yet, the game had to be simple enough for a child to play. I spent a good deal of time researching various types of video games to learn something about story creation and design technique. I have to add, though, that despite the challenge, writing the video-game scenes was the most enjoyable part of the process.

Which do you feel has a bigger impact on the reader, the beginning of the book or the end? And which was more difficult to write?

For my day job, I work as a litigation attorney. Conventional wisdom preaches that, in a trial, the opening statement is more important than the closing argument. There are studies showing that most jurors make up their minds after hearing the opening statements. The opening statement is also more difficult to craft, because you have to stick to the facts and can’t argue. The same thing is true of a novel. You have to hook the reader—it’s a cliché, but an accurate one. Plus, RECKLESS DISREGARD starts with a scene from the video game, and as I mentioned, those scenes weren’t easy to write.

I’m currently writing the next installment in the Parker Stern series, tentatively called DOMESTIC TERROR. Parker continues to avoid the courtroom because of his debilitating stage fright. Yet, he decides to take on the defense of an accused terrorist of the 1970s who’s been a fugitive from justice for decades. In the process, Parker discovers long-hidden truths about his family’s painful past.

THE BIG THRILL would like to thank Robert for taking the time to speak with us. For more information please visit Robert’s website.

Robert Rotstein (Los Angeles, CA), an entertainment attorney with over thirty years’ experience in the industry, is the author of Corrupt Practices, the first Parker Stern novel. He’s represented all of the major motion picture studios and many well-known writers, producers, directors, and musicians. He lives with his family in Los Angeles, California.